Edward S. Aarons (1916-1975) broke into pulp in 1938 and published regularly in the detective genre into the 1950s, using the pseudonym Edward Ronns. As pulp withered away Aarons broke into paperback originals. His biggest success was the Sam Durell series of spy novels, starting with Assignment to Disaster in 1955. Aarons cranked out 42 Durell novels in 30 years until his death in 1975, and the series was popular enough that Fawcett arranged with the author's brother to publish six more books under William B. Aarons' byline. Durell's final appearance came in 1983. I've read just five of the Durells so far, ranging chronologically from Assignment Budapest (1957) to my favorite, the preposterous, paranoid Assignment Peking (1969). I was eager to try Cairo Dancers to see what Aarons had to say about the Middle East or Islam fifty years ago, but it turns out to be less about Middle Eastern politics than about a madman's implausible plot to take over the world, and it proves to be the weakest of the Durells I've read to date.

Sam Durell, "the Cajun," works for General McFee of K Section doing the usual spy stuff. An intermittent subplot of the series involves his on-again, off-again romance with Deirdre Padgett, a character whose evolution from damsel in distress in the original novel to clinging-vine girlfriend to spy in her own right, which only makes Durell's life more complicated and dangerous, gives the series as a whole a little something extra. Deirdre's absent from Cairo Dancers, which frees Sam up to bond, shall we say, with some of the exotic females he meets in the story. Her absence makes the novel more conventionally generic, and that probably makes the old-fashioned nature of the pulp menace stand out more. 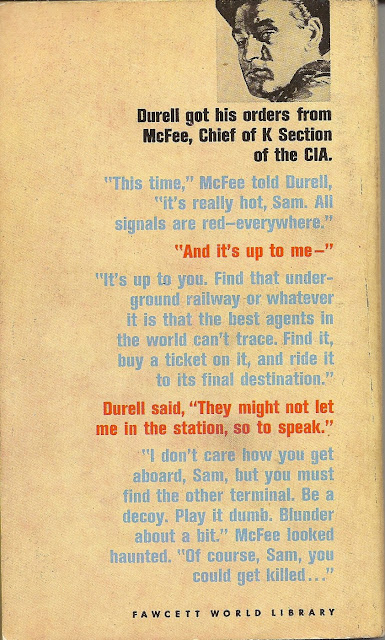 The idea is that a shadowy group is kidnapping key scientists from both the western and eastern blocs. Durrell's task is not so much to recover a German emigre laser specialist (and possible Nazi war criminal) for the U.S. as to infiltrate the network that is shuttling the scientists to their presumed mysterious destination. The scientist can be killed, if necessary, though Sam begins to question that imperative as he gets to know the old man's daughter.  Going to Munich to research the scientist's background (and deal with a sinister, Peter Lorre type West German spymaster), Durell discovers the existence of the Cairo Dancers, who hide in plain sight as a troupe of entertainers. His idea is to convince them that he knows a lot more about their organization than he actually does, so that they'll take them deeper into their organization in order to interrogate him.

The leader of the Cairo Dancers is Selim El-Rachid, the self-proclaimed "Second Prophet of Allah." One result of our modern age of terror is that most people today probably know more about Islam that Edward S. Aarons did. The "Second Prophet" thing, for instance, is an immediate mistake, since no Muslim regards Muhammad as the First Prophet. Instead, they consider him last and best of a line extending back to Abraham or earlier. Some ambitious person might say he's the next prophet, but even then, as Aarons himself recognizes on his own terms, most Muslims would regard such a claim as heresy. Selim El-Rachid, we learn, is an Egyptian officer who turned against the government of Gamal Abdel Nasser and proclaimed a sort of caliphate founded on nothing, so far as we can tell, but his speculative prestige as a world conqueror. By the all-too-knowledgeable standard of 2016, Selim's claim seems very flimsy, and one of this novel's weaknesses is its assertion that everyone is impressed by a charismatic power that Aarons never really shows us. Selim is a big guy in a fancy costume, with lots of self-confidence, and that's about it. We might have encountered a similar person in the pulp fiction of a quarter-century or half-century earlier, or in a low-budget movie serial. The irony was that at the same time that Aarons was writing Cairo Dancers a real but far less flamboyant supervillain, Sayyid Qutb, was planting some of the seeds of modern Islamist terror in opposition to Nasser, whose socialistic modernization agenda he found blasphemous.

Nevertheless, Cairo Dancers is prophetic insofar as Selim El-Rachid proposes to gain power through terror. Unfortunately, his is a Bond villain's notion of terror. His kidnapped scientists are being brainwashed through laser surgery into building a giant laser weapon -- Aarons writes in such a simpler time that he needs to explain to his readers what a laser is -- to destroy Israeli and western cities and force the world's capitulation. Fortunately, the Dancers have left blatant clues to the location of their secret lair and Durell, an Israeli agent and a group of loyal Israeli Bedouin assault the old Byzantine mountain fortress in a small-scale version of what would become the standard Bond-movie climax with Thunderball, a film released the year Cairo Dancers was written. The novel's great failing is Aarons' apparent inability to take his Muslim menace seriously or make him up-to-date and less campy, but much of the action also seems uninspired. And by "action" I mean moments like the scene when Durell and the scientist's daughter have been left for dead in a prison shack in the middle of the desert, where it gets so hot during the day that they can do little but lay panting on the floor, their life force ebbing away, yet manage to fit in a sex scene. To sum up, this was one of the more impersonal Durell novels, but Aarons did better than that even in my limited experience and I expect to find better as I add to my Durell collection.

Posted by Samuel Wilson at 3:59 PM