'Kitty Gardner couldn't be blamed for encouraging him, but the truth was going to be a bitter pill.' 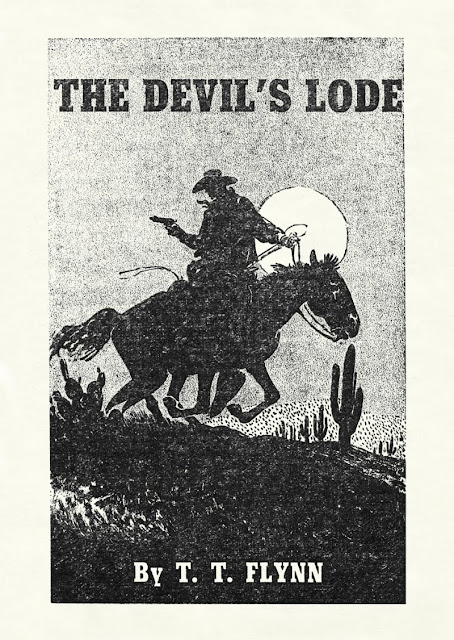 T. T. Flynn is best known today for writing The Man From Laramie, the source for one of director Anthony Mann's great western films with Jimmy Stewart. By the time that story first appeared as a Saturday Evening Post serial in 1954 Flynn was primarily a western writer, but at the end of the 1930s westerns were only a small part of his output. "The Devil's Lode" (Western Story, June 24, 1939) was one of only two westerns Flynn wrote that year, the rest of his stories going to detective pulps. Perhaps because he still wrote westerns only infrequently, this 60 page "book-length novel" has some freshness to it. Its hero, Paso Brand, flees Mexico to escape the family of a rival suitor he'd killed. He befriends a beleaguered gold miner who helps him out of one revenge attack and has new problems to solve. The main problem, in theory, is which of Bull Gardner's men at their isolated mine is betraying Gardner to the outlaw band of Shorty Baxter. Flynn sets up a lot of possibilities, but isn't really writing a detective story here. He makes Gardner's right-hand man a red herring, suspicious to us because of his reflexive hostility to our hero. In a lot of pulp fiction first impressions tell the whole story, but Flynn departs from expectations by making this antagonist one of the good guys, if never really a friend to our hero. His biggest departure from convention involves Bull Gardner's daughter Kitty, the inevitable ingenue who seems predestined to be Paso Brand's girl. Paso Brand himself seems to take this for granted, which sets up a reversal that gives a humorous unity to the whole sprawling story. Another young member of that Mexican clan has fallen in with Shorty Baxter's gang by the time they capture Paso and Kitty. Juan Escobar is determined to take revenge on Paso at a time and place of his own choosing, but in the meantime Paso desperately encourages Kitty to butter him up. This works better than Paso anticipates, as Juan proves willing to free Paso and forget his family honor if Paso will help him keep Kitty out of the dirty hands of the outlaws. Of course, Paso is happy to go along, though he pities Escobar for a poor sap. He keeps thinking this way all the way to the end of the story, when he advises Kitty to let Juan down slowly.

'You've got a problem in young Escobar. He's head over heels in love. It'll take a lot of talkin' to make him ever think different.'
'I don't want him ever to think different! I love him! Where is he?' Kitty cried, turning to the door.
Paso's mouth was open soundlessly as she left the room, running toward the office.


Paso actually takes this like a good sport, perhaps realizing that some cosmic justice has resolved his feud with the Escobars by allowing one of them to steal a girl away from him. Of course, like many an old-time cowboy, at least in the more comical stories, he's happy to have gotten a good horse out of his adventure. "Devil's Lode" isn't really comical apart from the ending, but it's an entertaining piece with space enough for Flynn to create a convincing sense of isolation and danger in the distant mining camp if nothing else. The novella stands out in length and quality from the mostly mundane contents of this particular issue of Western Story and promises better things still when Flynn becomes more of a full-time western writer in the 1940s.
Posted by Samuel Wilson at 7:24 PM No comments: