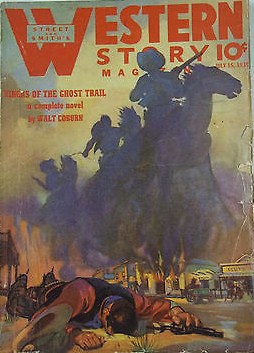 From Street & Smith in 1939, here's another beauty of an H. W. Scott cover for Western Story, presumably illustrating Walt Coburn's lead novelette "Riders of the Ghost Trail." A "complete novel" in this case adds up to 32 double-column pages. I just read a Coburn novelette from a 1938 Action Stories that was pretty good, so this roughly contemporary piece has a chance. Meanwhile, Kenneth Gilbert continues his serial Tamanawos Gold, Glenn H. Wichman offers another Hep Gallagher story, and Norman A. Fox, B. Bistrow Green, Dave Logan and Gunnison Steele contribute short stories. Of these, Logan (if this is a real person and not a pseudonym) was in the middle of a very short career. He first appeared in Western Story back on April 29 and made his second appearance the week before this issue. Another story would show up in November, and one more in March 9, 1940 number was his last. Maybe he had better things to do.
Posted by Samuel Wilson at 12:15 PM