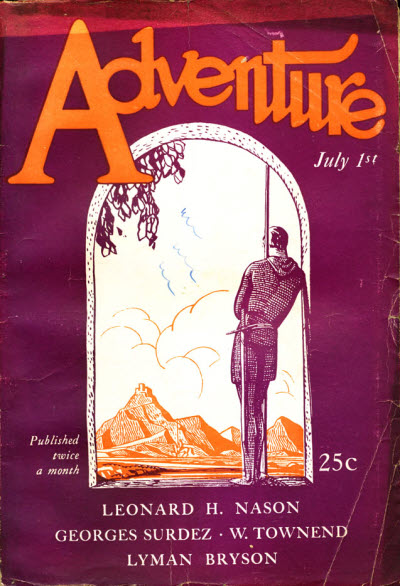 This 1927 Adventure was the first issue since February 1912 not edited by the beloved Arthur Sullivant Hoffman. Joseph Cox took over with the July 1 number but wouldn't make it to the end of the year. If this issue looks different from earlier Adventures spotlighted in the Calendar, that's not Cox's fault. Back in October 1926 the publishers tried to make the popular pulp a more upscale product, which meant doing away with the usual cover paintings. For a while there were no illustrations on the cover at all, but after they brought in prestigious illustrator Rockwell Kent as their house artist in January 1927 they eventually had him do cover illustrations like the one you see above. Within a month of Cox taking over Kent was gone and Adventure went back to fully painted covers. The insides remained top quality throughout this period. July 1 boasts a Georges Surdez story and the start of a Hashknife Hartley serial by a shockingly-unbilled W.C. Tuttle, as well as western stories by two of the dominant authors in the genre, Ernest Haycox and Alan LeMay. Leonard H. Nason gets cover billing for a nonfiction article, while Gordon MacCreagh's first report on his expedition to Abyssinia (aka Ethiopia) is ignored up front. Meanwhile, Lyman Bryson and W. Townend are not familiar names to me, though both hearken back to the early years of Adventure. Roger Pocock's serial A New Found World, concluding in this issue, was the only Adventure appearance of an author who'd been writing since the 1890s. A boxing story by Edward L. McKenna -- or so I assume from the title "In This Corner," rounds out the fiction lineup. For regular readers the change in regime probably made little immediate difference, but many fans and experts say that decline became apparent in time.
Posted by Samuel Wilson at 12:00 AM