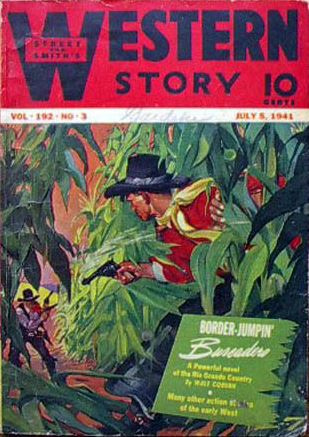 The more conservative cover format of Western Story circa 1941 may have given H. W. Scott less freedom than he enjoyed as a Street & Smith cover artist in 1939, but he (or his editor) could still come up with interesting cover ideas, like this cornfield combat. The headliner, as was often the case and would be so increasingly as Western Story reduced its schedule in 1943, was Walt Coburn. "Border-Jumpin' Buscadero" was one of ten long stories Coburn would place in the magazine in 1941 and one of (appropriately enough, if the Fiction Mags Index count is correct) forty-one stories he published overall that year. Harry F. Olmstead was an even more frequent presence, but short stories make up a lot of his Western Story output for 1941. Among the other contributors, Harry Sinclair Drago showed up eight times that year, as did Jim Kjelgaard, and Kenneth Gilbert appeared nine times if you count his serial Ghost-Tree Gamble (part 3 of 5 this week) as one story. You get the idea that you saw a lot of familiar names in the average Western Story, though O. A. Robertson was appearing this week for the first time since a 1937 serial. All these authors presumably earned their regular gigs by giving readers what they wanted, whether it was good or not.
Posted by Samuel Wilson at 3:28 PM