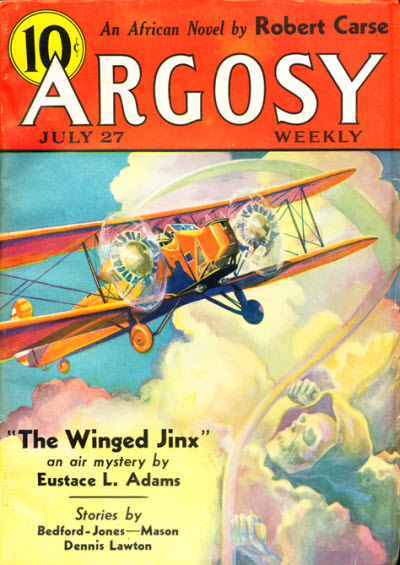 Another boffo 1935 Argosy, featuring Eustace L. Adams's novelette "The Winged Jinx," the conclusion of F. V. W. Mason's Lysander of Chios, and the start of a Robert Carse two-parter, Glory Road, about the Foreign Legion in Africa. "Winged Jinx" is great hard-boiled fun. The hero, a test pilot and sometimes mercenary airman, survives a plane crash but has one of those deadly pieces of metal slowly moving toward his heart, which only makes him slightly more fatalistic than normal. Most of his old buddies are already dead, after all. The crash ruins his company's chances of landing a plane contract with a Latin American banana republic, not to mention the U.S. military. In short order, he makes a sentimental visit to the repaired plane, bashes a stranger over the head with a fire extinguisher only to find that it's his business partner and best pal, resolves to fly himself and friend (presumed dead) into the ocean, and then gets hijacked by a stowaway who reveals that she sabotaged the plane and caused the crash to prevent that banana republic from gaining air supremacy over her small nation, but now wants the plane so she can bomb the enemy's invading army. Oh, and by this time our hero's buddy has awakened -- he mistook his pal for an intruder -- and it looks like a love triangle is in the works in the middle of what Adams calls a "banana war." In other words, if (like me) you thought Adams's Anywhere But Here was cool, you should enjoy this smaller dose of Adams, which is conveniently available, along with the entire July 27 issue, at unz.org.  There are also serials by H. Bedford-Jones and Dennis (Frederick Faust) Lawton, along with another adventure in the Aluetians by H. H. Matteson and a comic piece by Kevin Johnson. Check it out.
Posted by Samuel Wilson at 12:28 PM