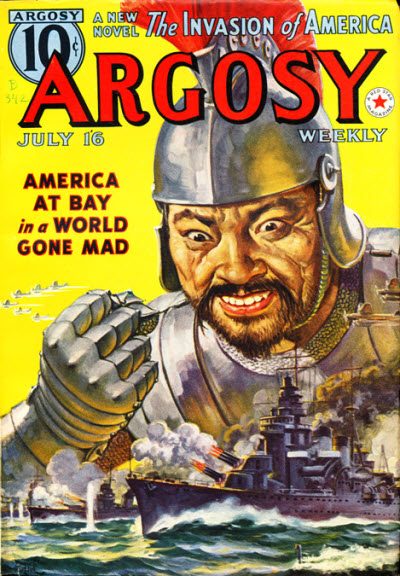 Now there's a Yellow Peril! Frederick C. Painton was another pulp author who found it more interesting (or simply more lucrative) to imagine the main threat to America coming from the Orient (if not Japan specifically) rather than from Europe and Germany specifically. Painton's a pretty good writer overall -- the one story of his I haven't liked was the most overtly comic one -- so I'd be interested in checking out The Invasion of America at some point. I actually have the final chapter in my collection, as you'll see next month. The FictionMags Index doesn't have a table of contents for this 1938 issue, but an eBay entrepreneur has scanned the relevant page. We thus learn that the July 16 number sports a boxing novelette by Richard Sale and an Oriental novelette by Sinclair Gluck. If the latter is part of Gluck's Dan Brice series it's probably good stuff. After leaving Bellow Bill Williams at sea two years earlier, Ralph R. Perry contributes a western short story, and given the title "Shorty Builds a Cow" it's most likely an attempted comedy. There are also short stories by two relatively unknown quantities, William K. Hubbell and Edwin Dial Torgerson, while Eric North and Norbert Davis continue their serials. The Painton and Gluck stories, plus that outrageous Emmett Watson cover, make this an issue I'd consider owning some day.
Posted by Samuel Wilson at 5:28 PM