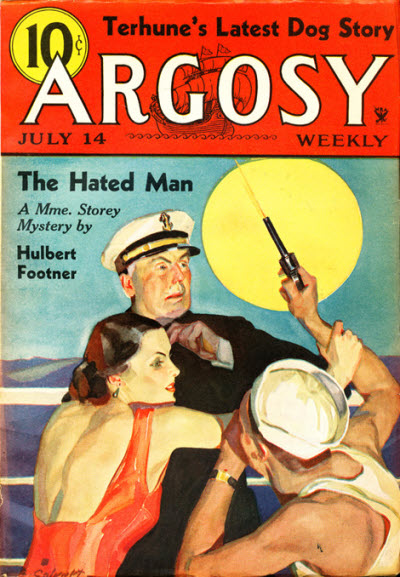 This 1934 Argosy is on my to-buy list thanks to "The Jungle Master," a Bellow Bill Williams novelette by Ralph R. Perry. You'll notice, however, that Bellow Bill doesn't get a lot of love from the editors, since neither he nor his author are hyped on the cover. It's understandable, however, that pride of place goes to Hulbert Footner's Mme Rosika Storey, one of pulp fiction's most popular heroines. Argosy had been publishing her detective exploits since 1923, sharing her during the Thirties with Woolworth's Mystery magazine. I'm not so thrilled about Albert Payson Terhune's latest dog story, but Terhune, an Argosy contributor since 1905, was probably this issue's most famous writer by virtue of his 1919 bestseller Lad, a Dog. Animal stories in general are a hard enough sell for me, but at least they have going for them, at their best, the suspense of hunt and pursuit in the wild. What dog stories offer to anyone other than dog lovers I simply can't say. The variety of the general-interest adventure pulps always comes with the risk that one or more stories might not interest you. Speaking of variety, this number also includes another old-timer, Ellis Parker Butler, as well as Foster-Harris's "The Wild Ones," another installment of Giesy & Smith's Semi-Dual serial and another of William McLeod Raine's western The Trail of Danger. Bellow Bill and Mme. Storey are enough to make this issue worth having for me.
Posted by Samuel Wilson at 9:28 AM