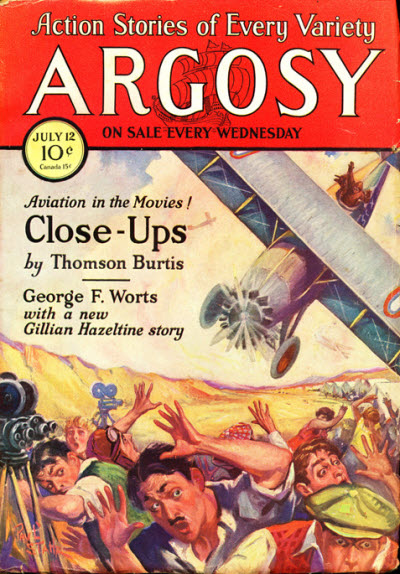 Thomson Burtis had been writing for just about a decade and had become a star of the aviation genre by the time he made his Argosy debut in this 1930 issue. The venerable weekly was never one of his primary markets; he'd appear six more times, including one serial, over the next two years and then stayed away until 1938. Of the "big four" adventure pulps, Burtis appeared most often in Adventure and Short Stories, and only once in Blue Book. The editorial policies and personalities behind that uneven distribution of output are a mystery to me. Argosy seems happy to have him here, but this issue's real attraction for regular readers probably was the start of a new Gillian Hazeltine serial by George F. Worts. The pulp defense attorney, reputed precursor to Perry Mason, had been an Argosy staple since 1926. Edgar Franklin, continuing his serial Moving Day, had seniority on all the fiction contributors this issue; he'd been publishing in Argosy since 1903.His serial stablemates, along with Worts, are W.C. Tuttle, continuing The Trail of Deceit, and Ralph Milne Farley, concluding The Radio Menace. Theodore Roscoe is the best-known of the short-story contributors, offering "The Ruby of Suratan Singh." He's joined by John H. Thompson, presumably with a Bill and Jim story, as well as less-known George Tibbitts, who's credited with less than a dozen stories in a career of little more than four years, including this one and only appearance in Argosy. Strange that he didn't have to wait as long as Burtis, but then again Burtis might have been holding out all this time.
Posted by Samuel Wilson at 12:58 PM