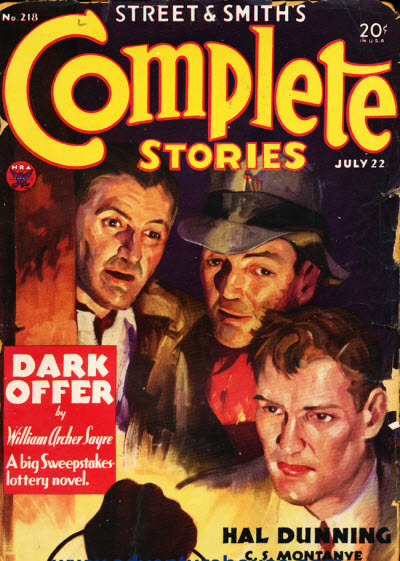 Complete Stories was another Street & Smith general-interest pulp whose gimmick was self-explanatory. There were no serials in it, which makes any issue safe to buy at random for modern collectors. It was launched as a twice-a-month in 1924, slipped to monthly in 1926, but was restored to its original frequency in the fall of 1928. By the summer of 1934 it had slipped back slightly, appearing once every three weeks. As is often the case when I encounter Street & Smith pulps from the Thirties, I see plenty of names I don't recognize, whose works I haven't read, the exceptions in this issue being Richard Howells Watkins and William Merriam Rouse, though I've heard of C. S. Montanye. William Archer Sayre, the credited cover author, was a house name, while Hal Dunning, the next most prominent name, was a dead man whose stories of The White Wolf were being ghosted at this time by Frederick C. Davis. Knowing these details does not inspire confidence in the product. Complete would add some more familiar authors later in the decade, most notably publishing one of Robert E. Howard's El Borak stories in 1936. For some reason, however, Street & Smith had a hard time a sustaining a general adventure pulp along the lines of Adventure, Argosy, Short Stories or Blue Book. Complete Stories slipped back to monthly in 1935 and would go bimonthly before expiring late in 1937.
Posted by Samuel Wilson at 1:36 PM