Vintage Paperback of the Week: Barnaby Ross, THE SCROLLS OF LYSIS (1962) 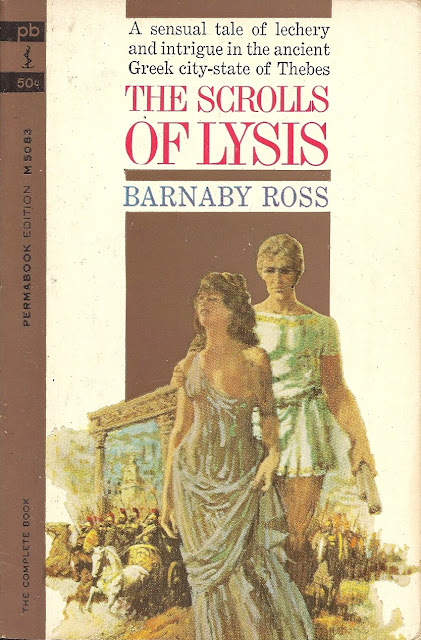 See if you can follow me here. Once upon a time, cousins Daniel Nathan and Emanual Lepofsky decided to write detective stories together. As individual writers they had taken the pen names of Frederic Dannay and Manfred B. Lee, but when they joined forces to create a new character, they decided to credit this fictional detective and narrator as the author of the book. This was Ellery Queen, whose name survives on one of the very last fiction mags in print today. As character and author, Queen was an instant sensation, but when Dannay and Lee created another detective, the actor Drury Lane, they decided not to exploit Queen's fame, perhaps because it would disrupt the Queen meta-narrative to have Ellery write stories about a different hero. Thus was invented Barnaby Ross, who is credited with four Drury Lane novels. In time, these books were credited to the more bankable Queen, yet there remained life in old Barnaby Ross. In the 1960s, Ross published six historical novels, non-mysteries. These were written by Don Tracy, who under his own name had written the source novel for the film noir masterpiece Criss Cross. So at last we come to The Scrolls of Lysis, written by a ghost using the pseudonym of a pseudonym of two pseudonyms. Thirty years past Drury Lane's heyday, was Barnaby Ross's past forgotten, or did people read these later novels believing them (while believing themselves clever) to be the disguised work of the famous Ellery Queen? That mystery I leave to some other detective to solve. It's enough here to say that The Scrolls of Lysis is a hoot on its own unpretentious terms. 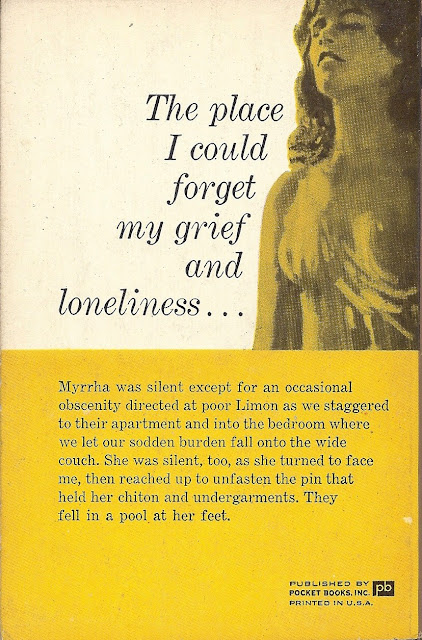 Does anyone write this sort of novel today? The sort of novel I mean might best be described as a scoundrel's process, in which a thoroughly unprincipled, arguably unlikable hero keeps us interested in his fate because his exploits are so exotic and his author invests him with some roguish charisma. Such a hero is Thamus, son of a Spartan refugee woman who serves the exiled Theban philosopher Lysis on the backwater isle of Gyarus. Cursed with a deformed foot and the low status of his mother, Thamus is despised by all his peers and despises them and the aged Lysis in return. He's bored by the old man's efforts to teach him how to read the scrolls intended for Epaminondas, the famous Boeotarch of Thebes who broke the power of Sparta and made military history at the Battle of Leuctra. Lysis once was the great man's teacher but was exiled when he (or his advisers) turned against the old man. Thamus regards him as little better than a lunatic, but Lysis prophecies a great career for the youth, whose ankle-cracking escape from a rocky shoreline deathtrap allows him to grow into a handsome, agile man. When Lysis and Thamus's mother are murdered by a Spartan raiding party -- led, we learn, by Thamus's father -- our hero sees it as his chance to escape the hopeless island. Escape becomes imperative when the local headman threatens to burn Lysis's scrolls. Thamus, along with bully-turned-buddy Limon and the lovely, shallow Myrrha, once Thamus's idol and now Limon's wife, sail away with the scrolls and Lysis's small collection of precious stones, but not before Thamus has to kill Limon's sister and her boyfriend, unbeknownst to Limon himself but witnessed by Myrrha, who will use her damning knowledge against our hero for the rest of the story.

On the mainland the little group soon becomes embroiled in Theban intrigue, since the Scrolls of Lysis are deemed strategically important for all Greece. The Spartans who killed Lysis wanted the scrolls because they thought they'd show them how to defeat Epaminondas, while Theban notables either want them or want them destroyed. It turns out that Lysis had written them in a kind of code that only Thamus can read, making him a hugely important person in Thebes once he gets there. Epaminondas adopts him as a son, inspiring him to get ideas about the Boeotarch's natural daughter, though that makes Myrrha, who wants only to be rid of the lunkish Limon, dangerously jealous. When Epaminondas matches his daughter with an officer Thamus hates, the son of his original Theban sponsor, he begins out of resentment to plot the Boeotarch's downfall through deliberate misreading of the scrolls. He also begins to set in motion his own downfall, fulfilling an almost-forgotten prophetic warning of Lysis.

I doubt whether any substantial character in The Scrolls of Lysis could be considered sympathetic, though the ultimately amiable Limon, who finds his level as a soldier only to set many dooms in motion inadvertently, comes close once his early cruelty toward Thamus is forgotten. For the most part, the cast is exuberantly unpleasant, Thamus himself and Myrrha taking the lead in incorrigible selfishness and spite. There's something playfully thrilling in discovering that nobody in a story is going to be the good guy or the good girl; it makes everything possible and every wicked act or thought guiltlessly entertaining. Not that the action in Lysis is that wicked; there's not as much sex as the covers suggest and there's not even a hint of the reputed homosexual orientation of the Sacred Band of Thebes, which might have added to Thamus's discomfort to the reader's amusement. Instead, Tracy/Ross has written a cynical adventure with plenty of battles, chases and intrigue of the sort we'd more likely find in a fantasy-world novel today. I like Tracy's writing overall, but his habit of having narrator Thamus tell us that he doesn't know how he came up with so many clever and pragmatic ploys and tricks -- they just happened -- did grow tiresome after a while. That complaint aside, it looks like Barnaby Ross was left in good hands, and I'd give the other Ross novels by Tracy a try if they ever cross my path.
Posted by Samuel Wilson at 9:00 AM