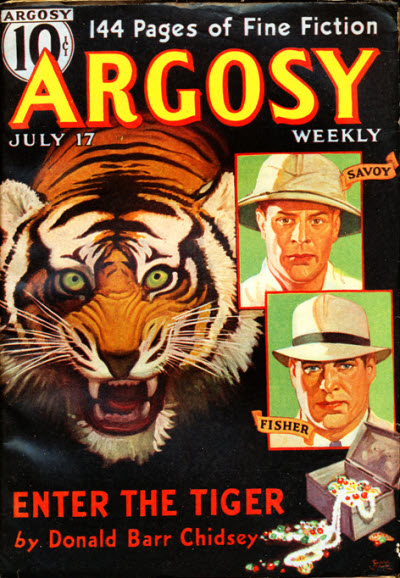 A beautiful Rudolph Belarski cover fronts this 1937 Argosy, advertising a good Fisher-Savoy story by Donald Barr Chidsey. The popular globetrotting team of detective and reformed thief were a safer bet for the cover than this issue's new serial, John Hawkins' Strike, an attempt at social realism by pulp standards. Theodore Roscoe offers one of his small-town gothic stories in his Five Corners series, while Luke Short continues King Colt and Judson P. Philips wraps up his harness-racing two-parter County Fair. Frank Richardson Pierce, William Chamberlain and Alexander Key -- later known for the Witch Mountain series -- contribute short stories. I read this one a few years ago thanks to the scanners who've made much of 1937 available online, and I remember it being pretty good overall.
Posted by Samuel Wilson at 10:50 AM