'And a damn good job it is, this bossing the Arena gang.' 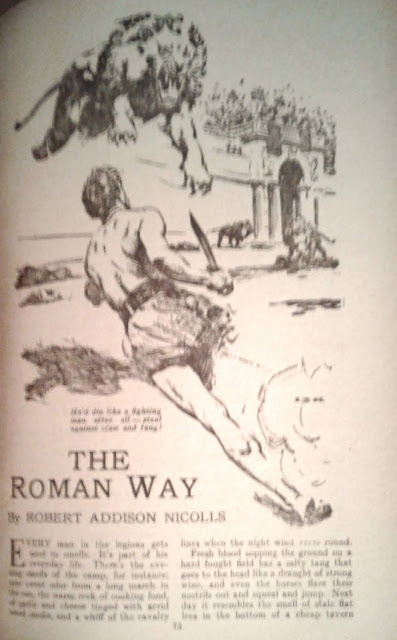 Robert Addison Nicolls (1905-1993), a history teacher and football coach at the Friends School of Baltimore, has a grand total of ten stories listed in the FictionMags Index, four of them backup stories for Doc Savage in the 1940s. His first pulp story apparently was his most popular. "The Roman Way" (Adventure, June 1940) was twice reprinted by Popular Publications, in 1950 and 1955 issues of the venerable story magazine. It's written in what could be called the anachronistic vernacular style, though our perception of the casual but not exactly slangy narration as anachronistic is conditioned by the more formal or flowery language of historical fictions by Harold Lamb and others. Basically Nicolls has the veteran Roman soldier Servius, now an assistant manager of a gladiatorial school and arena, talk in what sounds like the voice of a common man.

...the Arena dungeons outstink 'em all. They're in a class by themselves. Still, it's our bread and garlic now -- Marcus's and mine. And a damn good job it is, this bossing the Arena gang. Easy in winter when the shows aren't on, but a ticklish piece of work when the big season starts. We run our gang on legion discipline; you've got to if you want to hang on in this business. Marcus is boss, just as though he were still centurion in the old Tenth, and me his optio, his second in command. That's how it's always been. I guess that's how it'll always be. Marcus first, me second.


At the same time, Nicolls gives Servius vivid powers of description, particularly when it comes to smells.

Fresh blood sopping the ground on a hard fought field has a salty tang that goes to the head like a draught of strong wine, and even the horses flare their nostrils and squeal and jump. Next day it resembles the smell of stale flat lees in the bottom of a cheap tavern drinking cup, and the piled up bloated bodies spread a sickish sweet odor that makes a man retch in spite of himself.


The narrator's mind flashes back and forth from the arena to the days when he and Marcus fought in Britain alongside Julius Caesar. He remembers rising through the ranks under Marcus's strict discipline and finally earning his admiration and trust. After a long day of heroism in battle, Servius still gets flogged with Marcus's vinestock for falling in late that morning, but immediately afterward receives a commendation and promotion. He remembers Servius falling in love with a native woman, having a child with her, and having to leave them behind when Caesar withdraws from Britain. In the present, a gang of captured Britons condemned to be killed by beasts in the arena stages a riot. Marcus tries to convince the ringleader to have his men go peacefully, arguing that if they stay healthy they can at least give the animals a fight, even without weapons. Then he recognizes a bit of gold the young man's wearing and realizes that it's the son he left behind long ago. He offers the youth his freedom, but the Briton is determined to stay with his men. The most Marcus can do is arrange it so the Britons will have weapons to use against the beasts of the arena. This only lends a patina of honor to the execution and Marcus knows it. "I shall want a report on the deaths of the British prisoners," he tells Servius, reflecting once more on "the Roman way" summed up in the saying vae victis, "woe to the conquered." The effect is pathos rather than sentimentality and it's a surprisingly good fit with the slightly hardboiled tone of Servius' narration. The story clearly made an impression on readers, but one gets the sad feeling that Nicolls never topped his first effort.
Posted by Samuel Wilson at 7:54 PM No comments:

'The sun would have been kind not to have revealed this.' 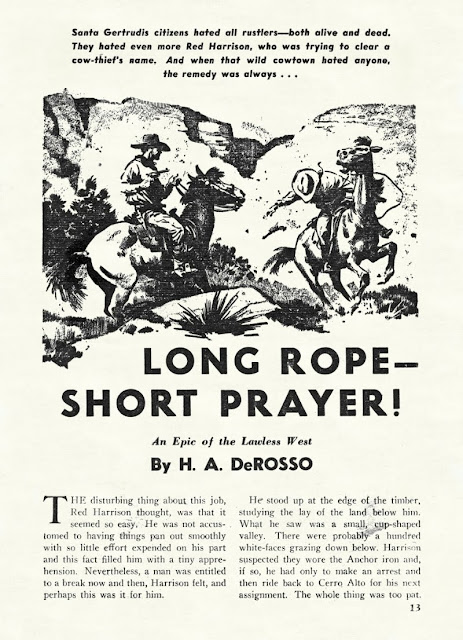 H. A. De Rosso has a reputation for writing some of the darkest western pulp stories. He peaked in the 1950s, as pulp westerns moved closer to the more mature tone of movie westerns in the same period. He published 25 stories in 1953, including "Long Rope - Short Prayer!" in the April 1953 10 Story Western. In this one, range detective Red Harrison is called to Santa Gertrudis to investigate rustling, only to find he's been set up. The rancher's wife Bridget Mullineaux had her own cattle stolen by a trusty henchman in order to create a pretext for a detective to reopen the case of Jim Woodruff, her lover who was killed for rustling. Bridget is certain that Jim was framed and expects Harrison to smoke out the actual rustlers while investigating the fake rustling. Her suspicions appear more plausible when some of Jim's old buddies try to scare Harrison out of town. They claim he's trying to frame someone for the most recent rustling, but it also looks as if they have something to hide. Harrison's investigation continues after he kills one of those men, bu the intervention of another woman, Isobel Cobb, starts to tear Bridget's story apart. Isobel tells Harrison that Jim Woodruff married her three days before he was killed -- and really was a rustler. She warns Harrison to quit and leave town or else she'll tell Bridget the whole story. Infatuated with Bridget, Harrison can't let that happen. He heads to Isobel's place, presumably to silence her, only to find that Bridget's faithful henchman Tacoma had already done the job -- this post's title sums up the scene -- only to be mortally wounded by another of Woodruff's old cronies. Tacoma lives long enough to tell Harrison that he killed Woodruff because "He hurt Bridget." Harrison hunts down the last rustler, as much to wipe out the truth once and for all as to get justice for poor Tacoma. "An ugly purpose was clawing at Harrison's brain," DeRosso writes, "He did not like to think about it. He tried pretending it wasn't there." But just the same he goads the rustler into a gunfight, even as he wonders "if this was worth it when stacked against a woman's illusory dream." There's no real benefit to it, since Bridget is married to the rancher.  The only payoff Harrison can hope for is some sort of loving look from her as he leaves, but he doesn't get it. It's almost stereotypically noirish stuff but in a western pulp from 1953 it must still have had some transgressive novelty, and even now it's probably the best story in the issue.
Posted by Samuel Wilson at 5:07 PM No comments: