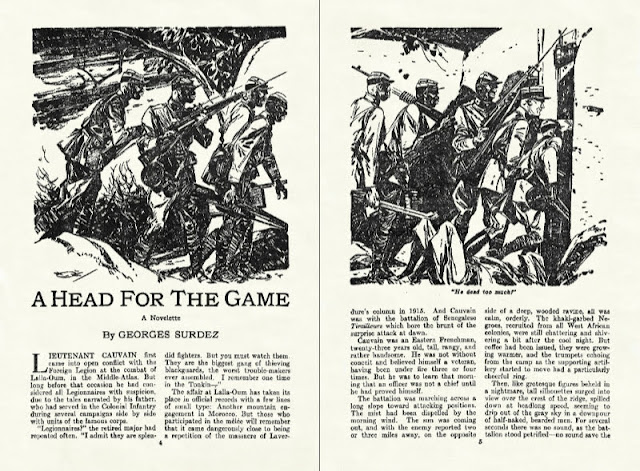 After having hardly any time for pulp reading for a while I finally got a chance to settle down with this issue of Adventure from from Howard V. Bloomfield's editorial regime. Despite the cowboy on the cover the lead story is a Georges Surdez novelette, "A Head for the Game." It's a change of pace for Surdez in that his usual French Foreign Legion protagonists appear here as antagonists, picking a feud with a commander of Senegalese Tirailleurs. The hero's command gives Surdez plenty of opportunities to make more racist statements than normal about African soldiers -- brave but stupid, incapable of keeping a modest feud like the one in the story from escalating to bloodshed unless strictly handled. The author makes some halfhearted attempts to make characters out of some of the Tiralleurs, but halfhearted might be too generous to Surdez this time. In any event, the main action, after the hero is systematically robbed of supplies by the Legionnaires, is his stealing a march on them, so to speak, by raiding an insurgent camp to reclaim the head of a Legion commander that had been displayed as a trophy. As is almost always the case, Surdez writes well, but this story leaves more of a bad taste in one's memory than is typical. 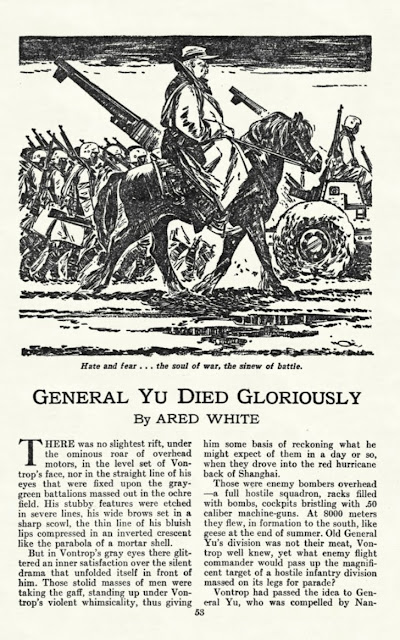 Meanwhile, "General Yu Died Gloriously" is the best story I've read to date by Ared White, though for me that isn't saying much. Usually the author of turgid spy stories, White here turns his attention to the Sino-Japanese War, as seen from the perspective of a German veteran of the world war serving as a glorified drill instructor for one of China's unreliable warlords. The German is appalled to find the warlord betraying the cause to the Japanese while his Chinese officers appear to accept his act with fatal passivity. He's about to take a chance to alert the central command when the most sympathetic of those officers appears to inform him, with the equivalent of a wink, that General Yu was killed in action, providing a heroic example for his troops to follow in obedience to central command. Stories about the Chinese war pre-Pearl Harbor could keep a critical distance from both sides in the conflict and are often more interesting than later tales with a more propagandistic purpose, and White definitely benefits from the timing of his story. For what it's worth, this issue also features Captain R. W. Martin's nonfiction account of being the first American flier to shoot down a Japanese bomber over China -- a story which was subsequently strongly challenged, if I recall correctly. 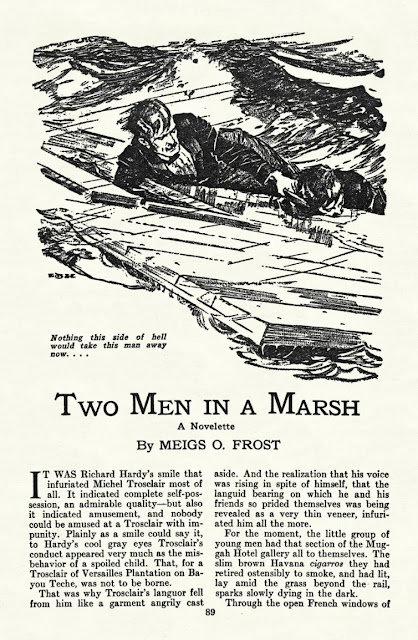 Towards the back of the book, Meigs O. Frost's "Two Men in a Marsh" is one of those stories in which a two-fisted northerner scandalizes the south by refusing to indulge in the local duelling habit. Our hero here is no coward, of course, but gives offense by finding the whole ritual of honor ridiculous. When a southern friend tries to make up for the hero's bad form in a manner that can only guarantee his own death, our protagonist is ready to kill his antagonist any way the antagonist pleases. But then the hurricane hits and the novelette becomes a survival story. Cut off from civilization and most food and fresh water, the northerner and the chivalrous ass must work together to survive, and to the southerner's credit he's nothing but reasonable about it. Needless to say, the men bond under adversity -- to the extreme, illustrated from behind on the page, of struggling naked on their raft to get the attention of a potential rescuer. This is the first story I've read from Frost to make an impression. He crossed the cultural border himself, being born in Connecticut and dying in Louisiana, where his story is set. At age 56, Frost was near the end of his pulp career. His last stories appeared in 1939, and it may not be coincidence that he won an award for his newspaper work on the New Orleans Times Picayune the following year.

Elsewhere this issue, Hugh Wiley, worthy of praise as the creator of non-stereotyped Chinese detective James Lee Wong, disgraces himself with a Negro dialect story, "Horseshoe Luck," while Perry Adams goes "off the trail" for "Rendezvous," a flashback-ridden affair in which a mountain climber returns to the "Grandmother" of the Alps on the anniversary of his wife's sacrifice of her life to save his. Arthur D. Howden-Smith concludes his slave-trade serial The Dead Go Overside while Richard Howells Watkins delivers a sea story, "Dead Reckoning," that did little for me. Overall, though, it's an entertaining issue, with some items of a more morbid historical interest.
Posted by Samuel Wilson at 4:28 PM 1 comment: