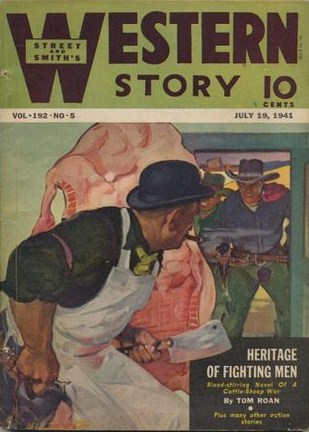 This 1941 Western Story marks the pulp debut of a great genre writer. Harold A. DeRosso had just turned 24. As our occasional correspondent Sai S. of Pulpflakes notes in a biographical sketch, "Six Gun Saddlemates" was his first sale after he'd written eighty stories. Whether it anticipates the H. A. DeRosso known to genre fans for his often bleak, regretful tone I can't say. I have a few DeRosso stories in the western pulps in my collection, and those I've read I've liked. By comparison, cover author Tom Roan had been at the game since 1923. A western specialist by this point, though he did occasional detective stories, he started out as a sea story writer.He endured to the end of the pulp era, publishing frequently in Bluebook in the 1950s. Philip Ketchum and L. P. Holmes, both decent writers, are here also, as is Seth (Frank Richardson Pierce) Ranger with a serial chapter. It looks like a pretty solid lineup for this magazine.
Posted by Samuel Wilson at 12:00 AM