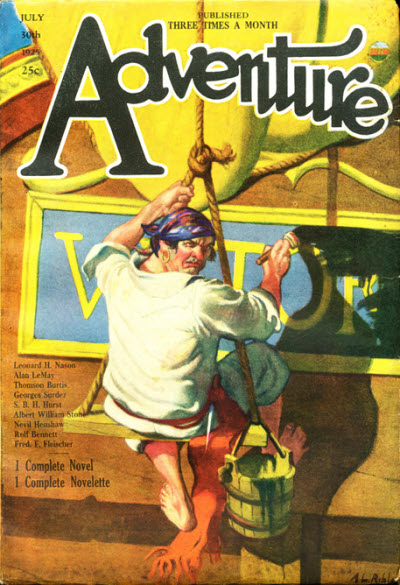 This July 30 issue is part of a nice run of 1925 issues of Adventure that have been scanned and made available online. The nicest thing about this particular run of issues is that it includes a complete serial by Leonard H. Nason, The Bold Dragoon. Nason made his name, I believe, as a World War I writer, but he stretches here to write a kind of picaresque novel set in the early 18th century about an English soldier left for dead on a battlefield making his way slowly back toward home with dwindling resources and dubious assistance. It's a cynical mock-epic told with gusto by the hero himself and taken as a whole it's one of the best things I've read in Adventure. Even if you didn't have the other installments near to hand (this one is part three of four), a massive Georges Surdez novel, Knaves of Spades, is reason enough to recommend this issue. And in case you can't track down the whole issue, the Mon Legionnaire blog has made Knaves of Spades available as a downloadable .pdf. There's also Thomson Burtis, whom I can take or leave, as well as Alan LeMay and six other short stories, plus the always entertaining Camp Fire letters section. I don't recall whether the great Julius Caesar debate provoked by Talbot Mundy's Tros of Samothrace stories was resumed this issue, but consider it a bonus if it was.
Posted by Samuel Wilson at 3:59 PM