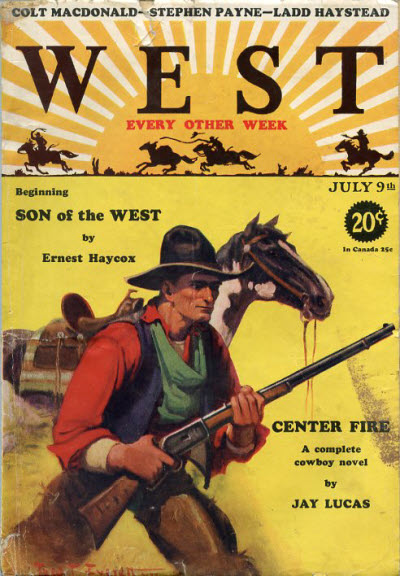 This is a 1930 issue of West, another twice-a-month publication from the publisher that brought you Short Stories. Star author Ernest Haycox had been writing almost exclusively for the Doubleday, Doran company since 1928, dividing his efforts between the two pulps. Less than a year from this issue Haycox made his breakthrough in Collier's, and from that point he continued to publish in pulps until the end of 1935, now working with a wider range of publishers, presumably since he was now more in demand. By the 1940s he was probably the most popular western author in the country. He might have remained so longer had he not died prematurely in 1950. The other featured author, Jay Lucas, is better known in some quarters as Jason Lucas, who after his pulp days became an expert on bass fishing, the author of a popular guide to the sport, and a longtime fishing editor for Sports Afield magazine. Of the names on top, (William) Colt McDonald and Stephen Payne probably are familiar to genre fans, while Ladd Haystead had a fairly brief pulp career -- his "Hell's Going to Pop" was only his third story in four years -- before becoming "the country's No. 1 farm journalist" according to Popular Science magazine. Future New York Journal-American editor (Sam) Houston Day and Gladwell Richardson are the other fiction contributors, while Griff Crawford contributes a poem and "Soogum Sam" does his regular "Ask Me an Old One!" column. You'll note that pulp fiction was a springboard to bigger things for a lot of people, at least in this issue.
Posted by Samuel Wilson at 4:21 PM