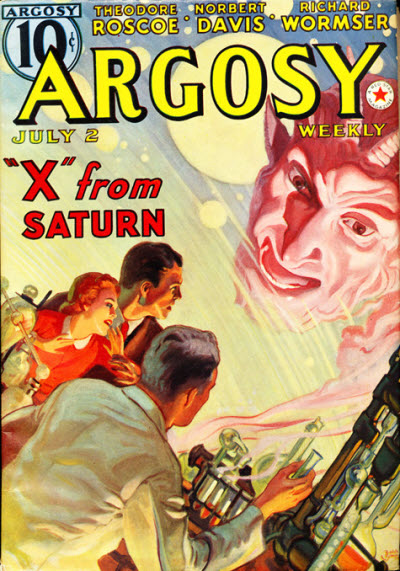 There is no story titled "'X' From Saturn" in this 1938 Argosy. Apparently, Munsey's cover editor thought that it was a more attractive title than Three Against the Stars, which itself was a retitling of Eric North's The Satyr -- hence the critter in the upper right. No matter what they name the thing, it wouldn't be the main attraction for me of an issue that features novelettes by Robert Carse and Richard Wormser, the latter featuring the popular hunter and showman Dave McNally. Serials by Richard Sale (The Rogue, apparently a pirate story) and Norbert Davis and a Theodore Roscoe short story help fill out a pretty solid-sounding issue, with Bennett Foster and Eustace Cockrell thrown in for extra measure.
Posted by Samuel Wilson at 6:45 PM