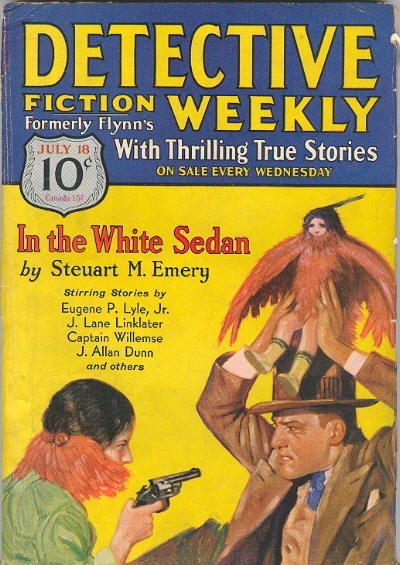 Here's a candidate for "write your own caption" if I ever saw one. The title of the cover story, Steuart M. Emery's "In The White Sedan" isn't at all helpful. Emery's career began with a 1919 poem in The Saturday Evening Post, and he landed a short story in Collier's in 1924, but by the end of the Twenties he was a pulp regular. His greatest success in pulpdom may have been the series of comic westerns set in the town of Jezebel, which appeared in Short Stories in the late 1940s. Emery's pulp career falls into near halves, war stories predominating in the first half (along with detective tales like the cover story above), westerns predominating after World War II, as that became one of the relatively safe genres for pulp writers. He has a story in the final issue of the Thrilling group's Popular Western (November 1953, in my collection) and continued to place stories in Thrilling's surviving western titles (Ranch Romances, Texas Rangers and Triple Western) until 1957. A final listing in the FictionMags Index is for a 1970 issue of the revived Zane Grey's Western Magazine. That may be a retitled reprint and it may be posthumous, but no one seems to know when Emery died -- not even Princeton University, which maintains his papers.
Posted by Samuel Wilson at 12:27 PM