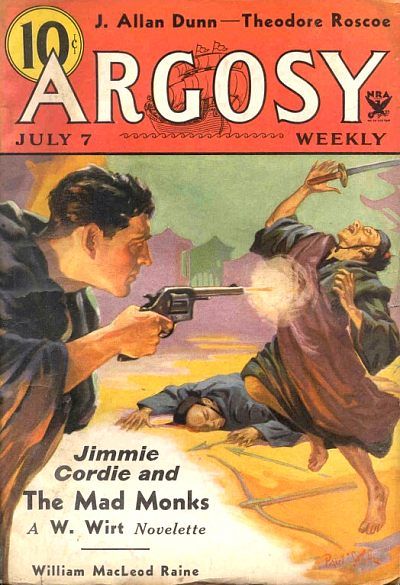 W. Wirt's Jimmie Cordie and his band of mercenaries were too extreme an expression of pulp for some Argosy readers. I've read several letters to Argonotes to that effect, with critics complaining that Wirt's stories had such absurd body counts that Cordie and his gang were certain to depopulate all China before long. Others liked the Cordie stories, perhaps for exactly the same reason why others hated them. Wirt gave Cordie a team of sidekicks who are arguably precursors to Doc Savage's amazing crew in their argumentativeness. The author sometimes went overboard indulging in the threeway banter of Red Dolan (a stereotyped Irish giant), Abraham "the Fighting Yid" Cohen, who laid a Yiddish accent on thick as a put-on but could turn it off for special occasions, as he does briefly in "The Mad Monks," and John Cabot "the Boston Bean" Winthrop, who was happy to insult either or both of the others. As you've seen, this 1934 issue pits this team of lethal misfits against an army of mad monks. You can't get much more pulp than that. Stay away if you don't like dialects, from the "Yid's" shtick to Red Dolan's brogue to Wirt's dubious way of having Chinese speak English with every possible "r" replaced with an "l," whether at the beginning, end or middle of words. But the very violent absurdity that turned off some contemporary readers works in Wirt's favor now, either at a camp level or as pure bloodthirsty nuttiness.

"The Mad Monks" isn't the only politically incorrect story in this issue, though J. Allan Dunn's "Two Days to Live" may only look that way, or simply look creepy, at first glance. 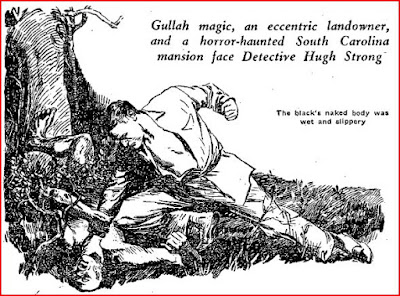 Along with these two lead novelettes, we get a carny tale by Theodore Roscoe and a Bill and Jim vignette by John H. Thompson, and serials by Frank Richardson Pierce, William McLeod Raine and the team of J. U. Giesy and Junius B. Smith, reviving their popular Persian occult detective Semi-Dual for the last time after chronicling his exploits since 1912. Once again, this is an issue you can check out in its entirety at unz.org.
Posted by Samuel Wilson at 12:00 AM