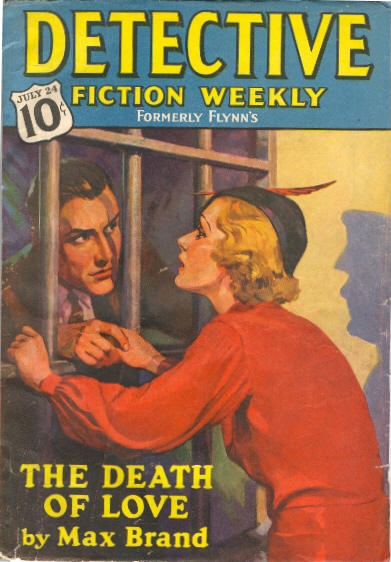 Is this Detective Fiction Weekly or Tragic Romance Weekly? Max Brand seems unsure, but what editor is going to question the great man? At least the cover artist assures us with prison bars and a policeman's shadow that the cover story will have something to do with crime. This 1937 number actually shapes up as a decent issue, giving Brand the benefit of the doubt, when you include a novelette by George Harmon Coxe and a Sarah Watson story by D. B. McCandless, along with short stories by Charles Molyneux Brown, George Armin Shaftel and Lawrence Treat, though giving Ray Cummings a science fiction series might not be the greatest idea. The editors may have realized that, since Cummings' "The Case of the Frightened Death" is the first story in his "Crimes of the Year 2000" series to appear in nearly two years, and would be the last. Meanwhile, B. B. Fowler is in the middle of his serial Graduation in Red, introducing "the World's Most Unusual Detective," who is either Barry Chase or Indian Joe, since the FictionMags Index lists them as co-stars. Graduation presumably was successful enough to justify giving Barry and Joe the cover for their next serial in December 1937, but they had just one more outing after that, a two-parter in 1938. In any event, if the cover doesn't inspire despair the contents may be worth a look.
Posted by Samuel Wilson at 4:17 PM