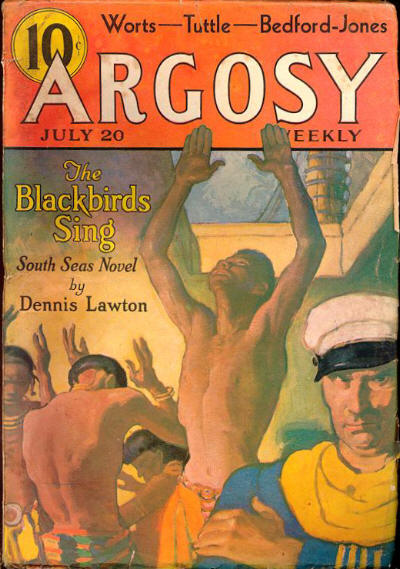 This 1935 Argosy is near the top of my want-to-buy list, mainly because it has the one installment of F. V. W. Mason's Lysander of Chios currently unavailable to me. Also on the serial front, it concludes John Wilstach's High Treason, continues H. Bedford-Jones' Riley Dillon, Masquerader, and introduces a new name to pulp readers with Dennis Lawton's The Blackbirds Sing. Note that I wrote "new name" and not "new writer." That's because the authorities say that Dennis Lawton was yet another pen name for the multipseudonymous Frederick S. Faust, best known to history as Max Brand. "Lawton" appears to have fronted only two stories, this one and the serial Perique, begun at the end of 1935. As these were both South Seas stories, I don't know whether Faust was trying to develop a genre brand name or if he knew that his other aliases would be busy in Argosy for the rest of the year. George Challis would have the last two Firebrand stories in print during this serial's run, while Max Brand would launch a serial of his own, The Sacred Valley, within that same time frame. Whatever his motives, this tale of a displaced cowboy involved in South Seas slave trading looks promising. There's also what may be a rare standalone novelette by George F. Worts; at least neither Gillian Hazeltine nor Singapore Sammy is mentioned on the cover. In addition, there's a novelette by Tom Curry, which adds to this issue's attraction, and a comic western short story by W. C. Tuttle, which doesn't. Overall it looks like much more good than bad.
Posted by Samuel Wilson at 3:28 PM