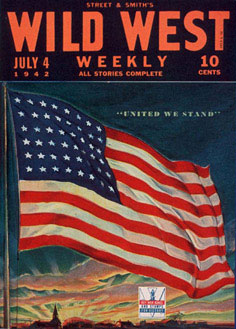 In July 1942, with World War II not going well for the U.S. and its allies ("Hitler is Winning" read one Time magazine headline that summer), magazines of all genres and formats decided that a common show of patriotism might lift the national spirit. Wild West Weekly conveniently had a July 4 cover date for its "United We Stand" flag cover, though Western Story, perhaps to avoid newstand confusion, saved its flag cover for the following week. The twice-a-month Short Stories put the flag on its July 10 issue, while the monthly Blue Book put it on its August issue, which of course was on the stands in July. Inside, of course, each magazine was its normal self. This issue's star is The Border Eagle, a character created by Walker A. Tompkins under the Philip F. Deere alias in 1933. The team of Hungry and Rusty was created by Samuel H. Nickels back in 1932. For once, non-series characters appear to preponderate, as written by Cliff Walters, Tompkins under his own name, and two pseudonyms for Norman W. Hay. So here's a real rarity: a holiday themed pulp cover. Enjoy it along with the day.
Posted by Samuel Wilson at 4:37 PM