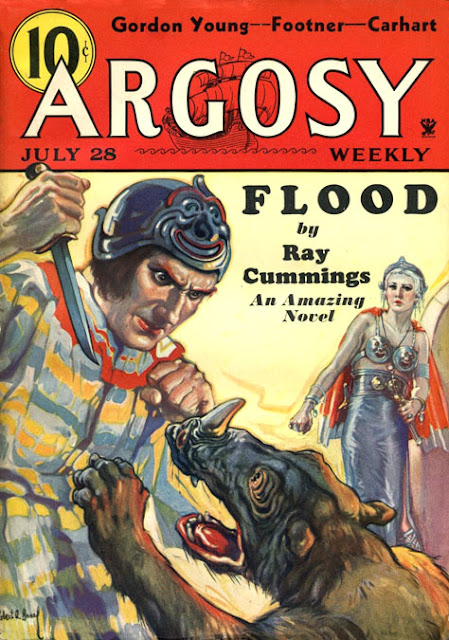 Ray Cummings wrote one of the silliest stories I've read in a pulp magazine, but the stuff I find silly now probably helped make him popular enough to merit a 1934 Argosy cover for his latest serial, Flood. I know it's unfair to judge a writer with as long a career as Cummings' by one story, but he wouldn't exactly encourage me to buy an issue he's in. Cummings aside, this number doesn't really have a top-flight lineup. Hulbert Footner continues his Mme. Story serial The Hated Man while William McLeod Raine concludes The Trail of Danger. Gordon Young, a writer long identified with Adventure, made his Argosy debut earlier in 1934; his novelette "Cap'n Jack" in this issue was his second and last appearance. Western and rodeo specialist Arthur Hawthorne Carhart contributes the novelette Rodeo Roper, while Douglas Leach, whose other Argosy stories I've read and liked, offers "Ananias and the Sorcerer" and William Merriam Rouse presents "Bub Gets Set." It does look like a subpar issue at first glance, but that's mainly because of the very high standard Argosy set in the early-mid Thirties.
Posted by Samuel Wilson at 12:00 AM