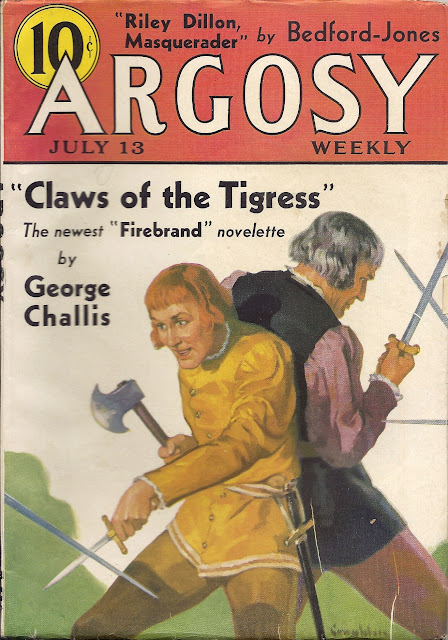 Here's the last of my run of four consecutive 1935 Argosy issues in my personal collection. The main attractions for me were the Tizzo the Firebrand cover story, by George (Frederick "Max Brand" Faust) Challis and another installment of F. V. W. Mason's serial Lysander of Chios. This issue also concludes Kevin Johnson's three-parter The Marines Having Landed and continues John Wilstach's Revolutionary War serial High Treason. 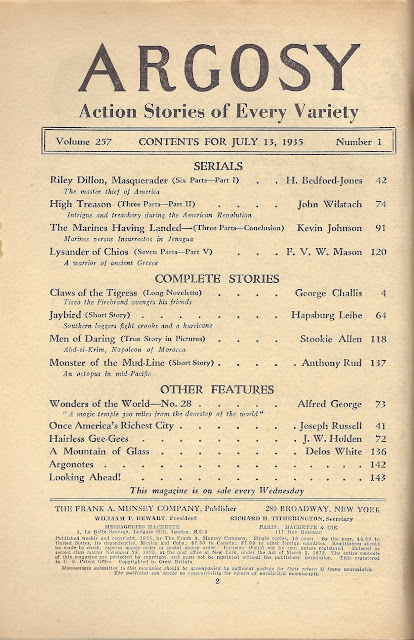 Joining the serial lineup is "king of the pulps" H. Bedford-Jones with Riley Dillon, Masquerader. Riley Dillon may be a rarity for Bedford-Jones, in that he created the gentleman thief under the pseudonym Rodney Blake -- a new one for the protean author --  for Mystery, a slick genre magazine sold exclusively at Woolworth's. When he brought the character to the Munsey mags (mainly Detective Fiction Weekly), Bedford-Jones took credit under his real name. He eventually brought Rodney Blake back to life as an author of westerns. Masquerader is Dillon's only appearance in Argosy; HBJ returned him to DFW and apparently grew tired of him early in 1936.As for the rest, Hapsburg Leibe's "Jaybird" is a hillbilly disaster story while Anthony M. Rud's "Monster of the Mud-Line" is another animal story. Somebody liked those, I guess. My to-read pile is becoming a to-read tower with these and the other pulps I'm continuing to accumulate. At some point, definitely during the second year of this blog when the Pulp Calendar is finished, I look forward to describing these stories in more detail. For now, this issue of Argosy was sponsored by: 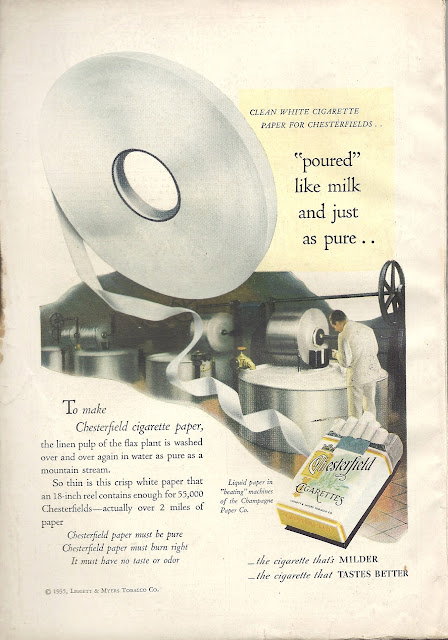 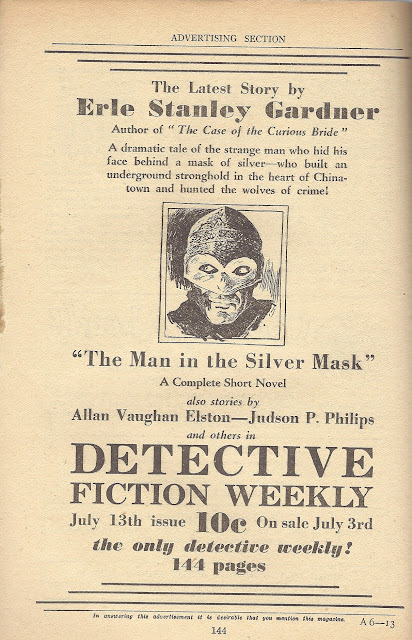 Erle Stanley Gardner's experiment with a costumed crimefighter lasted for three stories, according to the Fiction Mags Index. Given that Perry Mason had just hit big, it's nice to see that Gardner wasn't resting on his laurels.