For those readers who don't follow my movie blog Mondo 70, I'm sharing this first post in a very relevant series reviewing a well-regarded adaptation of one of the great hero pulps. I plan to follow The Spider's Web with more pulp-based serials, including Call of the Savage, based (apparently very loosely) on Otis Adelbert Kline's Jan of the Jungle, and more to be announced. For now, here's my favorite hero-pulp character, presented under the stewardship of Columbia Pictures. They never did right by Batman, but Richard Wentworth may fare better.... 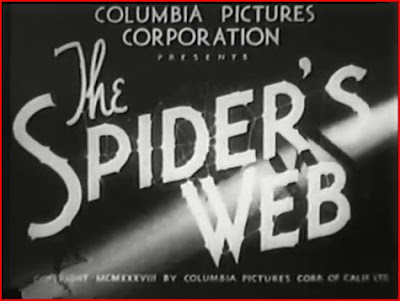 For some people, pulp fiction is embodied by crimefighting heroes like Doc Savage and The Shadow. They're the two best known of a generation of pulp heroes that flourished in the 1930s, before and during the advent of comic book superheroes. One of their peers was The Spider, "Master of Men," who was published by Popular Publications, while the big two were put out by Street & Smith. Among the most popular hero pulps, The Spider was the first to be made into a movie serial, not long after The Shadow had made his unsuccessful feature-film debut. In pulp, The Spider's adventures were written mostly by Norvell W. Page, using the Grant Stockbridge pseudonym. I find Page the best of the hero-pulp writers, the master of the often overwrought Walter Gibson (who wrote The Shadow as Maxwell Grant) and the often clumsy Lester Dent (who wrote Doc Savage as Kenneth Roberson). Page could paint a word picture of dramatic if not fantastic action better than his rivals, and his apocalyptic imagination makes The Spider resonate with modern readers in ways his rivals can't match. Of course, what Page wrote might be called "destruction porn" today, because The Spider's enemies don't play around. They're usually terrorists of some sort rather than mere gangsters, for whom mass destruction is the way to power or the way to wealth through mass extortion. Cities were devastated and civilians slaughtered before the Spider meted out justice to the guilty; like comic-book heroes today, The Spider wasn't very good at preventing mayhem. He was better at assuring that people didn't get away with it. Richard Wentworth was The Spider, but unlike the Zorro-Batman archetype, Wentworth also fought crime in his civilian identity as an amateur criminologist and often spent large portions of Spider stories doing so out of disguise. Wentworth had a modest support team consisting of his chauffeur Jackson, his butler Jenkins, his all-around man friday Ram Singh and his fiancee Nita Van Sloan. No relation to Edward the actor, Nita often bemoans the apparent fact that Richard's costumed career prevents them from marrying -- presumably since it would be impracticable for them to have children -- but for all intents and purposes she embraces his lifestyle to the point of pinch-hitting as The Spider on occasion. She may not have the same sort of training Richard and his other helpers have, but a machine gun is often a great equalizer and she can use one with relish. Rounding out the regular cast is Police Commissioner Kirkpatrick, a friend of Wentworth who suspects him of being The Spider, whom he'd have to arrest as a killer vigilante, but never can prove the dual identity. 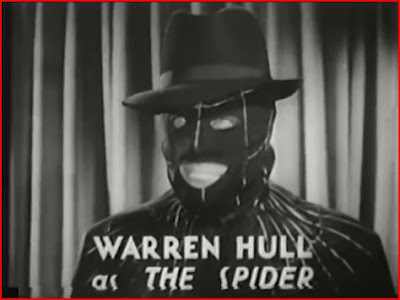 Serials notoriously wrought havoc on comic-book heroes, altering origins and other details to suit often unclear purposes. By comparison, at least on the evidence of Chapter One, The Spider's Web is fairly faithful to its pulp source. Its major innovation is the costume The Spider (Warren Hull) wears. While the pulp character often scurried through the city in a fright wig and makeup to scarify criminals, he was shown on the magazine covers in more debonair garb and a modest domino mask. The cinematic Spider wears a full face mask with a spiderweb pattern matching that of his cape. He has his full supporting cast, though the police commish's name has been shortened arbitrarily to Kirk. Nita (Iris Meredith) makes a good first impression as co-pilot of Wentworth's private plane as they're returning home from some vacation. She actually expects to be married, since Richard has resolved to give up being The Spider. An attempt to sabotage their landing soon changes his mind, and Nita takes the disappointment like a good sport. 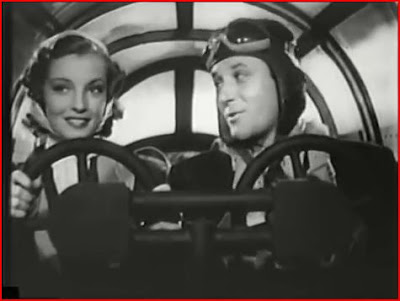 The sabotage was perpetrated by minions of The Octopus (??? in Chapter One), who sees Wentworth the criminologist as an obstacle to his plan to control all transportation and thus apply a stranglehold to the entire national economy. The Octopus is a classic serial mystery villain, someone whose identity under his white hood we'll be invited to guess over the remaining chapters. He walks with a limp, afflicted with a shriveled leg that's almost certainly a bit of misdirection. He speaks into a microphone and his voice is amplified (and distorted, no doubt) by speakers in his office, where black-hooded minions report and await orders. 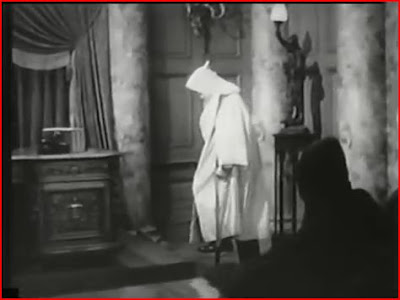 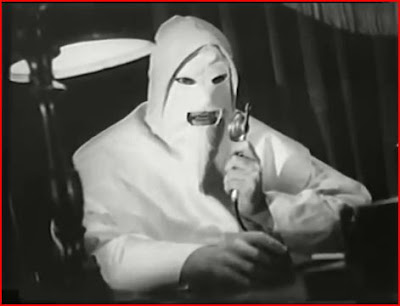 Like the typical Spider villain, The Octopus takes no prisoners; at the climax of Chapter One he plots to blow up a bus depot, but The Spider manages to evacuate the place simply by showing up and terrorizing commuters with his presence. In case that didn't suffice, he and Ram Singh (future Ed Wood collaborator Kenne "Kenneth" Duncan, playing the man from India with no hint of an accent) have a gunfight with the Octopus's gang, including -- it's my guess since he isn't credited -- a very young John Dehner. The bomb is on a bus that The Spider tries to drive a safe distance from the building and any civilians, but he doesn't get the thing a safe distance from himself. Of course, then as now, the teaser for the next episode assures us, as if serial audiences needed such assurance, that Richard Wentworth will survive to face new crises next week. 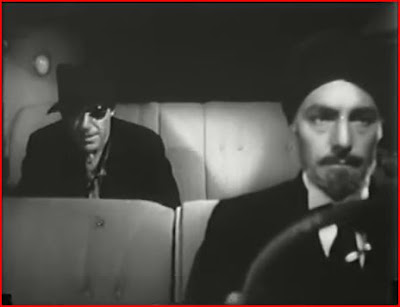 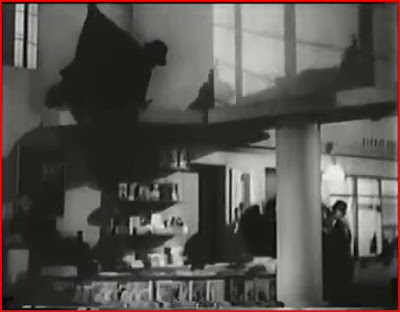 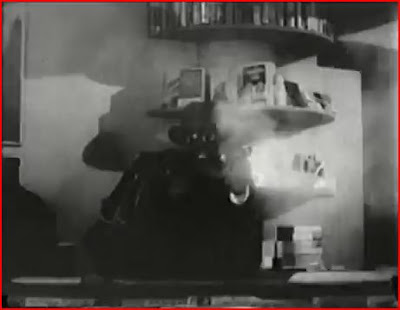 The Spider's Web intends to highlight Richard Wentworth as a master of disguise. In the opening credits Warren Hull is introduced thrice over, as Wentworth, The Spider, and his one-eyed underworld alias Blinky McQuade. Wentworth also briefly amuses Nita with a vaudevillian Chinaman bit. While Wentworth is shown to be a quick-change artist, Hull will depend on his vocal versatility to put over his different guises. He has a charming moment in this chapter while changing into Blinky when he has a little conversation between two of his personalities. If people thought the Spider one of the nuttier pulp heroes, that moment won't dissuade them, but it does give the hero more character than the typical serial protagonist. Hull may not have the authentic Spider's cold fury, but he makes a likable action hero and, to be fair, this story is just getting started. Stay tuned for more chapters through the month of July, or get ahead of the game by watching the serial yourself at the Internet Archive.
Posted by Samuel Wilson at 9:00 AM