'I hate to soil my decks,' he said crisply, 'But I shall kill the first man to board me.' 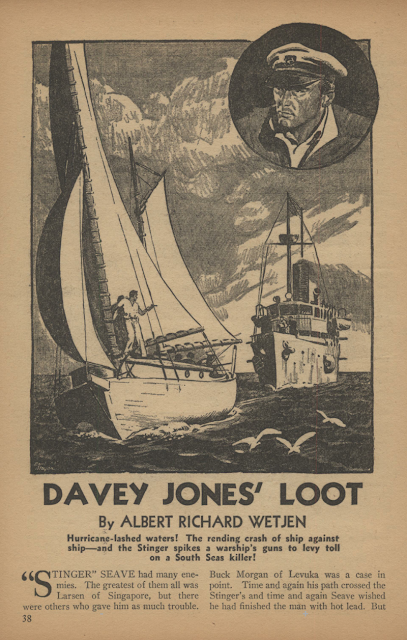 Albert Richard Wetjen had created a host of arguably interchangeable sailor heroes by the time he thought up Stinger Seave in 1938. This time he was determined to give readers a different type, at least physically, and a different style of story. The Seave stories are written in a retrospective style by an omniscient narrator who knows the character's entire history, foreshadowing Seave's death on at least one occasion. In an early outing, "Davey Jones' Loot" (Action Stories, December 1938), the narrator goes so far as to note that Seave would kill the story's villain on a later occasion, but not on this one. Seave himself was envisioned as nearly the opposite of Wetjen's other giant brawlers. The Stinger is "a small, frail man with a sandy, ragged mustache, mild blue eyes and a suit of comfortably baggy whites." A cold rage often seethes beneath his mild manner, and his threats are never bluffs. He is the most heartless and possibly most nearly psychopathic of Wetjen's violent heroes, though all the stories I've read have shown him in the right, or as much in the right as a "free trader" can be. Stinger Seave's idea of free trading is poaching pearls from an atoll claimed by Japan, as a matter of law, and by Buck Morgan, by right of might. Morgan is enraged when Seave, at this point a relative newcomer, muscles into Laviata Lagoon and hurls backs Morgan's efforts to drive the Stinger out. Morgan then commits the worst sin imaginable among free traders: he rats Seave out to the Japanese, forcing the Stinger to dump his cargo of pearls into the open sea to avoid arrest. The typical battling pearler might bellow and roar in anger, but Wetjen, playing the historian and claiming the Stinger's mate as his source, writes that Seave "sat at his table in the main cabin, a bottle of gin beside him and a glass in his hand ... and did not move, save to call the steward to bring a fresh bottle, right up to the time Morgan's brig was sighted." Over the objections of his crew ("The Stinger had not with him at this time that bunch of hard cases he was later to gather"), he sets a course to ram Morgan's ship before confronting the half-drunk, terrified Morgan and making him vacate the vessel. Morgan doesn't quite go without a fight and actually wounds the Stinger, and for that Seave spares him -- for the time being. "You're the first man who ever caught me off my guard, and I'll let you live to talk about it." The story ends on an ironic note, as Seave, who had earlier advised against cleaning Laviata out, sets a course to return and take every pearl remaining. Before Morgan's treachery, Seave had been a kind of conservationist poacher; leave something behind, after all, and you'll have another harvest later. Now he no longer cares. "I am a very impatient man," he says, "and I have patiently stood for a lot the past few days." It's a slightly ominous note to end an early adventure on, but Wetjen meant these to be darker stories than normal, and at the very least he succeeded at making them entertainingly different.
Posted by Samuel Wilson at 3:02 PM 2 comments:

More bang for your buck, or more quotes for your quarter

I haven't read much worth writing about lately, but what I have read lately interested me in a different way. I've just made my way through a recently-scanned issue of Fifteen Western Tales from May 1947. There were a few good stories in the more introspective late-pulp style -- stories by T.C. McClary, William Heuman and Tom W. Blackburn are highlights -- and relatively few in the more corny, cliched style. What impressed me most about the issue was the sheer density of text it offered. Any pulp reader knows that type sizes varied throughout the era, depending on how many pages a magazine had and how much content an editor wanted to cram in. Sometimes sizes varied within a single issue, as in many a mid-1930s issue of Argosy. The "normal" pulp page usually had forty-something lines of text to a column, but you often saw it go over fifty. This Fifteen Western Tales had a daunting 63 lines of text to a column. The only other time I've seen type that small in a standard-sized pulp is in a 1944 Adventure in my own collection, but I attributed that to Popular Publications (also Fifteen Western's publisher) having just reduced Adventure's page count from 160 to 144 pages. I don't know how representative  the May 1947 issue was, but in another recent scan from 1946, and another from 1949 (all with the same page count) the number of lines is much closer to "normal." Mind you, I'm not complaining about May 1947. Reading it on a 10" screen in a very good scan didn't strain the eye, and of course in real life it would be bigger still. To me there's something comforting about those walls of text. It looks like you're getting your money's worth, whether you paid a dime or a quarter once upon a time, a whole lot more in the 21st century, or absolutely nothing for a scan. Thinking about it, though, made me wonder whether anyone else noticed differences in type sizes or had an ideal number of lines per column for the optimal reading experience. One reader's feast of print easily could be another's eyestrain, especially as another grows older. The one sure thing is that when you look at something like that May 1947 issue you can believe that the editor and publisher tried their best to give you as much fiction as possible that month, and believing that is a good feeling.
Posted by Samuel Wilson at 6:21 PM No comments:

'Dirty! He is strong man, that fellow.' 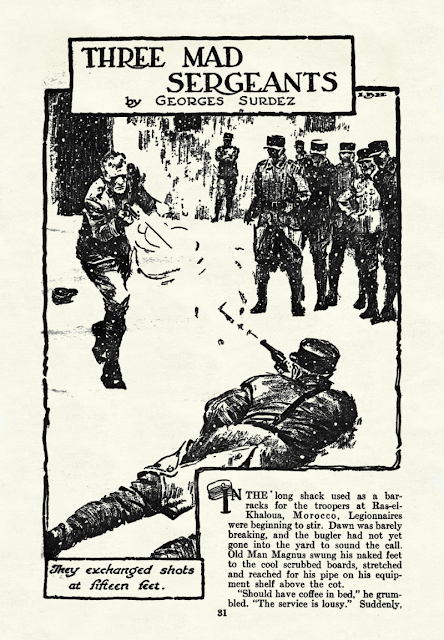 There's often a vicarious "can you take it?" quality to Foreign Legion stories. The readers is invited to imagine whether he, in the protagonist's boots, can take the discipline, the climate, the bullying by superior officers. Such stories are often tests of character, the final exam taking place under fire when some (usually) Muslim insurgents attack the post or the patrol. Going against that grain, Georges Surdez's "Three Mad Sergeants" (Adventure, February 1939) is one of the master's most nihilistic works in his genre. It concerns a unit on punishment detail in the Atlas mountains as winter hits. They're put in charge of the titular non-coms, the worst of whom, and thus the leader, being a sadistic, possibly syphilitic Pole named Larkorska. While he torments the men, the other two, rivals for a woman, goad each other toward mutual destruction, egged on by Lakorska, the enemy of all. The hero of this tale is Magnus, a former German officer who apparently joined the Legion to forget his killing of a best friend for cowardice on a world-war battlefield. Normally he's the drunk of the regiment -- or else it's the Bulgarian, Nikirov, obsessed with finding a hidden stash of booze -- but as he sobers up, deprived of liquor (apart from the daily wine ration) by the cruel Lakorska, he regains enough of his old pride to find his situation intolerable. 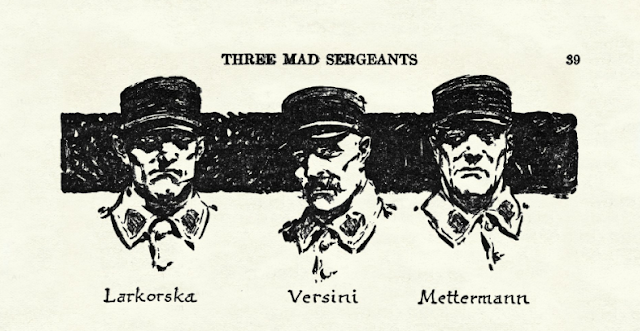 Not to worry, though, since after Lakorska finally gets one of the other sergeants to kill the other, the maddest of the sergeants takes out the survivor and goes completely berserk, holing up in his well-stocked, well-fortified quarters to take potshots at anyone that moves. With his newfound clarity, Magnus realizes that the men have to take Lakorska alive in order not to be accused of fragging all three sergeants. He also comes up with a plan to smoke him out of his lair so he can be dogpiled, but doesn't anticipate the madman bursting out into the open stark naked, his apparently pasty pallor making excellent camouflage in the snow. It falls to Bulgarian brute Nikirov finally to subdue Lakorska, overcoming the Pole's proverbial strength of a madman (see Nikirov's comment in the header) in a desperate grapple. In the end, Nikirov finally finds the legendary stash and all the survivors get wasted except Magnus, who holds out until the captain who originally assigned everyone to this wintry hell offers him a promotion for his leadership. That brings back unbearable memories of the war, along with a sergeant's stripes, both of which he hopes to "soak off" by throwing himself off the wagon at the end. Most of the time you can find some sort of a moral in a Surdez story, but this one is bracing, and arguably one of his best, in its complete absence of such a thing.
Posted by Samuel Wilson at 3:12 PM 1 comment:

ESQUIRE: The slick that wanted to be pulp?

For the past couple of weeks I've had a chance to look through midcentury issues of Esquire, the prestigious men's magazine founded in 1933 and still flourishing today. It's been a shapeshifter of a magazine, starting thick with prestige, with Ernest Hemingway and F. Scott Fitzgerald as regular contributors, and becoming a cutting edge magazine on both the fiction and nonfiction fronts from the mid-1950s forward. But from the end of World War II to about 1952 Esquire made a big commitment to genre fiction. Look at it during those years and you can see what Popular Publications was aiming for when it transformed Argosy from a pulp to a full-sized magazine. Stories are designated as "Mystery" or "Western" when appropriate, and where there had not been proper illustrations in earlier years now there are dramatic two-page spreads, even for stories that are only that long, like the example shown here from June 1949. 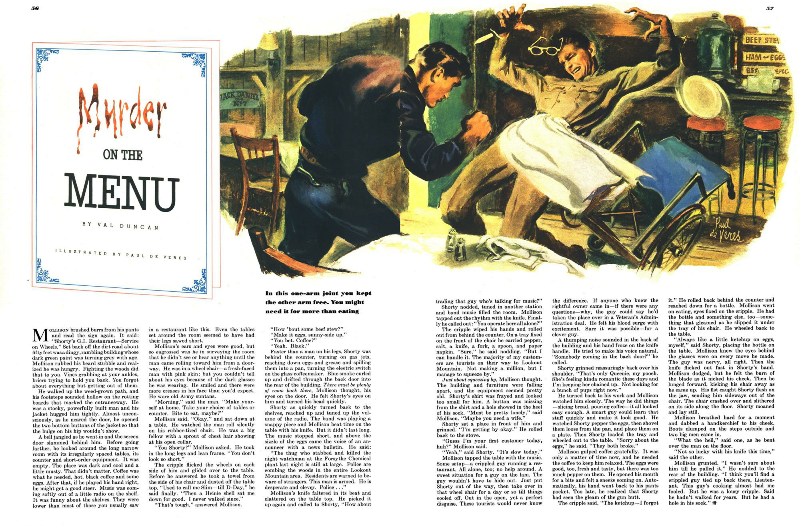 Esquire's major contribution to genre fiction was Henry Kane's private eye Peter Chambers, who made his debut in February 1947 and remained an Esquire exclusive through the end of the decade. 1947 - 52 are the peak years for pulp-esque genre ficton in Esquire, and while many of the authors who appeared there also placed stories in slicks like Collier's and The Saturday Evening Post, one suspects that Esquire's status as a men's magazine, and a reputation gained by its showcasing of Varga and Petty girls, encouraged those writers to be, shall we say, more manly in their work. My guess is that erstwhile servicemen, initially attracted to Esquire by the pin-ups during the war, were the target audience for postwar he-man fiction. Along with Kane and numerous top-hand westerners, Esquire also published a good deal of early Ray Bradbury, including "The Illustrated Man." In short, this magazine at midcentury was a cornucopia for pulp or all-around genre fans. But after 1952, once co-founder Arnold Gingrich resumed the reins as publisher, Esquire turned again toward more literary fiction, after a few years of transition that, for example, placed Hugh B. Cave and Norman Mailer in the same issue. Objectively speaking, Esquire's greatest years were yet to come, but its greatness consisted in combining highbrow content with a pop-culture sensibility, with little room for genre fiction in the mix. There was a different kind of greatness in the previous generation, before "men's magazine," Argosy notwithstanding, came to denote something much less classy.
Posted by Samuel Wilson at 6:24 PM No comments: