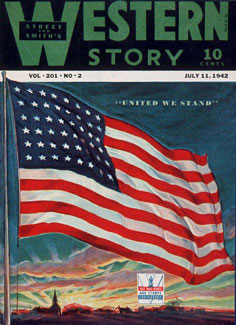 Speaking of pulp publishers reusing covers (see July 10 below), since the whole point of the July/August 1942 "United We Stand" magazine project was to show the flag on every cover, Street & Smith figured it was fine to use the exact same flag cover on all their pulps. The July 11 Western Story thus has the exact same cover as the July 4 Wild West Weekly. It also ran on the July 4 Love Story, the July issues of Doc Savage and Astounding Science Fiction, the August issue of Detective Story, and the August 1 issue of the twice-a-month The Shadow. Of Street & Smith's fiction mags, only the plus sized bimonthly Unknown Worlds failed to fly the flag to my knowledge. Meanwhile, Munsey's moribund magazines, Argosy and Flynn's Detective, couldn't be bothered, while Herbert Morton Stoops painted a whole bunch of allied flags for the August Blue Book. E. Franklin Whitlock's cover for the August Adventure has a flag in it but not the "United We Stand" slogan. It's still more than most Popular Publications magazines and most pulp publishers apart from Street & Smith did.
Posted by Samuel Wilson at 1:01 PM