When he died in 2009, Elmer Kelton was widely hailed as the best western writer of his time, by which presumably was meant, in the face of whatever claim might be made for Larry McMurtry, that Kelton was top hand among genre specialists. Kelton belonged to the last generation who learned their trade in the western pulps, a peer of Elmore Leonard and John Jakes. Most of his pulp stuff appeared in Ranch Romances, understandably given that magazine's longevity and frequency. He was still placing stories in the Thrilling Group's remaining pulps when Ballantine published Barbed Wire, their third Kelton novel, in 1957. It resembles a Ranch Romance less than it does, at least thematically, the T. T. Flynn novel and Anthony Mann film The Man From Laramie. It's more Mann than Flynn, I think, because the protagonist reminds me of Jimmy Stewart's flawed, driven heroes. Doug Monahan is an ex-rancher who's gotten into the barbed wire business; he and his former ranch hands bring the wire and string it up when ranchers or farmers want to enclose their land. When he tries that in Kiowa County he runs afoul of Captain Andrew Rinehart, the local patriarch who took the land from the Indians and wants to keep it an open range for his cattle. When Rinehart's men break up Monahan's wire-stringing camp and kill his beloved Mexican cook, while Doug's employer scurries away like a coward, he provokes a slow-burning feud. Monahan isn't out to kill anyone, but he refuses to be driven out and strives relentlessly to interest the locals in barbed wire. He finds a customer in Noah Wheeler, an old war buddy of the Captain's who's been given freer rein to run a farm when others wouldn't get away with it. Wheeler's grudge isn't with the Captain but with a smaller "range hog" rancher whose scrub bulls get in the way of Noah's ambitious stock breeding plans. But Rinehart, egged on by foreman Archer Spann, sees any fencing as an insult to himself and his legacy. Along with his men, he's got the tenuous backing of his hand-picked sheriff Luke McKelvie, torn between loyalty to his patron and a growing appreciation of the rule of law. Taking his informal title of "peace officer" seriously, he tries to discourage Monahan and Rinehart from provoking each other, but there are too many forces in play, as well as the two antagonists' irreconcilable wills, for the well-meaning lawman to control. 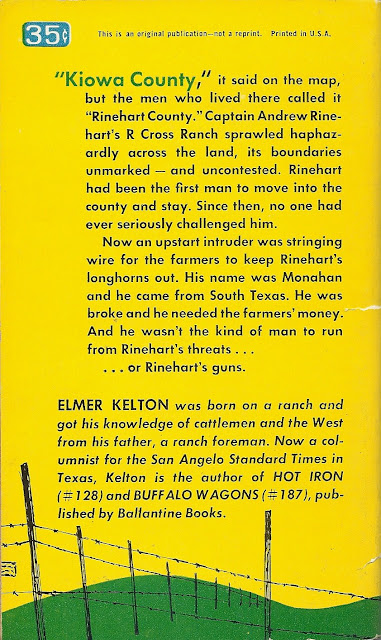 Two things stand out in this first Kelton novel I've read. The first is his eye for the details of hard work, acquired from the ranch background touted on the back cover. The opening pages will give you as thorough a description of digging post holes as you'll probably ever want. I appreciate that sort of immersive detail, which explains why I find myself preferring ranch stories to generic gunfighter tales. The second standout is his consideration for both sides in the barbed-wire debate, though he clearly sympathizes with those characters who see the fencing off of land as a necessary and progressive step. He also allows readers to understand, if not agree with, the attitude of opponents like Rinehart, who becomes a figure of some pathos as he grows more conscious of his failing powers and more concerned over his wife's delicate health. Barbed Wire is almost a tale without a villain, but Kelton's approach to his villain is still unusual. He emphasizes that Archer Spann is a superior foreman, legitimately skilled in all the aspects of that job, as well as a clean liver who never touches alcohol. His fatal flaw is his "littleness," his inability to be "big," by which Kelton means a defensive, spiteful selfishness that leads him to rob a discharged cowhand of the $300 he'd allowed the ranch to withhold as a savings account. Spann is unable to transcend the bitterness of his upbringing and always looks for someone on whom to take out his undying resentment. Loyal to Rinehart in the hope of inheriting the R Cross Ranch from the childless rancher, Spann constantly urges the old man to escalate the campaign against Monahan and Wheeler, finally betraying his irredeemable mean streak when he gun-butchers Wheeler's prize cattle and tramples Wheeler's daughter in the novel's most brutal scene. It's the most brutal scene not simply because it's violence against a woman but also because, after the murder that starts the feud, Kelton goes out of his way not to kill major characters.

I got the sense that Kelton was consciously defying genre expectations, creating situations and relationships that make the reader almost certain that this or that character will die, only to deny the cheap catharsis of death without seeming to contrive his way out. It's not just about denying violence: Rinehart's wife is introduced as frail and at least momentarily bedridden, and once you tag Rinehart as a tragic antagonist you expect him to lose the thing he loves the most, but she simply gets better instead. Kelton finally teases her leaving Rinehart instead of dying on him. Likewise, you think that Wheeler's son Vern, the Rinehart cowhand robbed by Spann, is surely doomed to be killed by the foreman or one of his minions, especially once he hooks up with a childhood friend turned rustler, but for all that Barbed Wire is a metaphor for generational conflict as a metaphor for the nation's progress, Kelton's ultimately more interested in reconciliation than revenge. His main characters -- even Spann has a guilty conscience, though it never stops him -- are intelligent and empathetic enough to see when they've gone too far. Monahan is willing to quit the barbed-wire business after Noah Wheeler gets beat up, and has to be talked out of blaming himself for the collateral damage from his war of wills with Rinehart, whose stubbornness takes longer to break down but does so nonetheless. Not even Spann is killed, and the end of Barbed Wire feels no less cathartic for that. Having read this early Kelton, and knowing that he had a half-century of writing to go, I suspect that there probably was some reason for all the acclaim he received at the end of his trail.
Posted by Samuel Wilson at 5:21 PM