'Jiminy Krishna! Now we get the hell from here!' 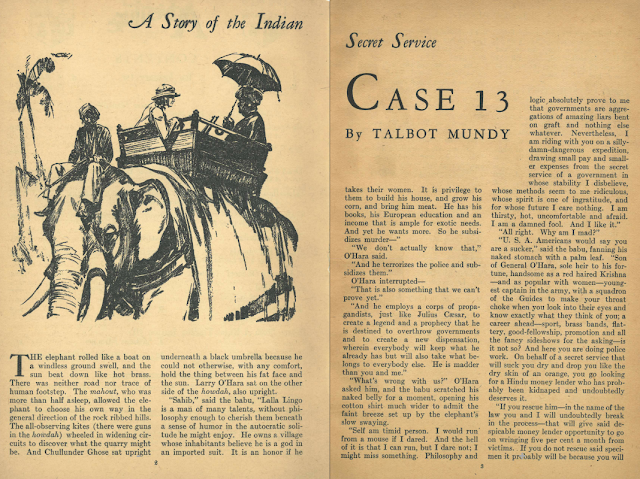 Chullunder Ghose is one of Talbot Mundy's series characters, a babu (i.e. an English-speaking Indian bureaucrat or professional) who worked for the Crime Investigation Department. The babu is often a figure of contemptuous fun in pulp fiction (see L. G. Blochman's Guru Dutt) but Mundy's is a more sophisticated figure, capable of real wit and possessed of a degree of worldly-wise cynicism missing in similar characters who exist only so authors can write funny sounding sentences. As Ghose says to his sometime colleague Larry O'Hara, "Philosophy and logic absolutely prove to me that governments are aggregations of amazing liars bent on graft and nothing else whatever. Nevertheless, I am rising with you on a silly-damn-dangerous expedition, drawing small pay and smaller expenses from the secret service of a government in whose stability I disbelieve, whose methods seem to me ridiculous, whose spirit is one of ingratitude, and for whose future I care nothing." Such eloquence is juxtaposed with presumably put-on pidgin talk and a veritable word jazz of multicultural references. Here's how he answers the simple question, "What's your plan?"

"Non est. Haven't one. Do you mistake me for a fathead general in Flanders studying a map to find out what the enemy is thinking? No, O'Hara sahib. This babu is opportunist ad lib. Am exponent of the theory that cats jump otherwise than expected, Am ju-jitsuist of circumstance. If circumstances pull, I push them. If they push, I pull them. We are being sent to do a cheap job that the politzei have failed at. Let us not act like policemen."


He's half Charlie Chan, half Groucho Marx, and that's not the half of it. For the purposes of the story quoted above, Ghose is also a superstitious fraidy-cat. I don't know if "Case 13" (Adventure, January 1, 1932) is numerically accurate as far as Ghose's publication history is concerned, but it suffices that the hunt for bandit chieftain Lalla Lingo is Ghose's thirteenth and theoretically unlucky investigation for the C.I.D., and he can't let the frightful idea of it drop. He and O'Hara must track down the bandit, who has kidnapped a moneylender at the instigation of three prominent debtors. Ghose worms his way into Lalla Lingo's camp by stripping his clothes and going naked as a holy man, while O'Hara gets to wear a dhoti "as a tribute to your inhibitions." It's really an amusing enough story without the whole superstition angle, which seems shoehorned in as if Mundy felt a need to undermine his character's intellectual effectiveness, the better for O'Hara to play the action hero. Or he may have felt that it made Ghose a more complexly comical figure. It may be that Mundy didn't fully have a grip on his creation yet. If I get a chance to read Ghose's later appearances I should be able to say whether the babu of "Case 13" is the finished product or only a work in progress.
Posted by Samuel Wilson at 6:35 PM No comments:

'Say the word, pal, and nothing will come back but me and the field order book.' 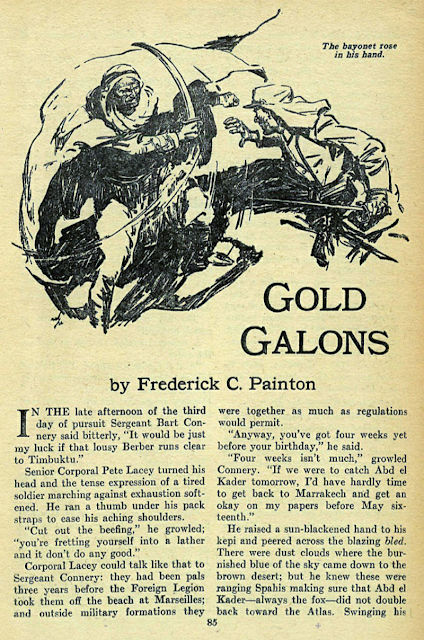 Frederick C. Painton was an air-story specialist before becoming more of an espionage writer until World War II, when he became a war correspondent. It's unusual to find him writing a Foreign Legion story, and in fact "Gold Galons" (Adventure, March 1937) isn't much of a story. It features two Americans who joined the Legion to get off the proverbial beach, one becoming a corporal, the other making sergeant and aspiring to officer's training school at St. Cyr. Corporal Lacey and Sergeant Connery remain buddies, though their different career tracks and the impact on their friendship might have made a story in its own right. The story here, however, is the threat to Connery's advancement presented by a onetime romantic rival, Lieutenant Latour. The American beat up the Frenchman off duty after Latour tried to flog the woman who had been his but had become Connery's. At first, heading into a battle, all seems professional between the two men as Latour gives Connery the coordinates for an artillery barrage. Something goes wrong, however, and Connery discovers Latour's error when he sees that he's firing on his own men. Of course, Latour insists that the error is all Connery's. "You species of merde -- you have killed twelve of my men and wounded twenty," the lieutenant protests, promising to have Connery court-martialed. The American's only hope is getting hold of Latour's field-message book, which he believes will vindicate him by showing that Latour gave him the wrong coordinates in the first place. Lacey basically offers to frag Latour to get the book, -- see the header -- but Connery demurs. After the next engagement the sergeant faces a dilemma when he discovers that both Latour and Lacey have been wounded. There's a bit of sloppy writing her that the editor missed, since Connery appears to discover twice over that Latour has been wounded. In any event the enemy is closing in with bad intentions for the wounded, and Connery can't carry both men to safety. He has to choose between his buddy and his superior officer, with Latour promising to clear Connery's name by admitting his error, even though someone has stolen the precious book. In the end, he decides that Lacey is more badly wounded and more in need of help. Taking his buddy to the medic, he leaves Latour to a cruel fate at the hands of Chlueh tribesmen, and throws away his only chance of redemption in the absence of the field-message book. It turns out, of course, that he made the right choice after all, for in the between Latour's wounding and Lacey's, the American corporal "glommed" the book off the Frenchman. Painton writes well as a matter of style, but his story is resolved too neatly for its own good. It's a story that probably could have been told in any military setting, and making it a Legion story only exposes its inferiority to the good stuff put out by the likes of Surdez, Newsom, Carse, etc. Painton was better off sticking to the genres he did well, and for the most part, with exceptions like this, he did so.
Posted by Samuel Wilson at 7:46 PM No comments: 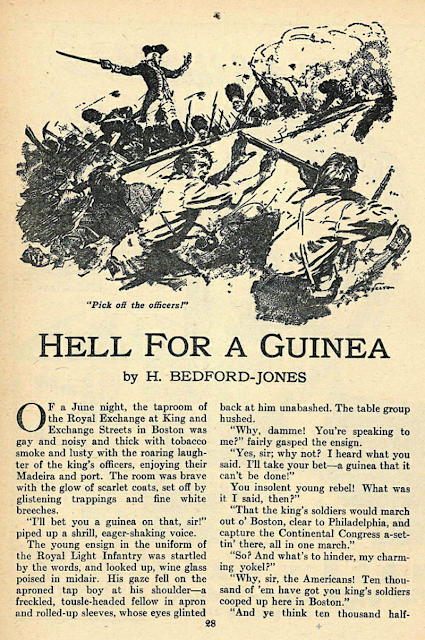 One of H. Bedford-Jones's specialties was worm's-eye view accounts of history in the making. His "Hell For a Guinea" (Adventure, March 1937) makes the battle of Bunker Hill the backdrop for a petty wager between "tap-room yokel" Adam Ford and Ensign Sullivan of His Majesty's army. When Sullivan boasts that the Redcoats will march unimpeded from Boston to Philadelphia, there to arrest the Continental Congress, patriot Ford bets that guinea that the British won't be able to break out of Boston. To make the bet more sporting, Sullivan vows that his men will break out within three days of the wager. One thing I like about this story is the way HBJ avoids the temptation to make the bet itself some great turning point. While Sullivan's comrades warn him against announcing the British schedule too exactly, it turns out that the Americans were well aware of the Redcoat plans well before Ford crosses over to their side. He's been given a pass "to hell and back by way of Charlestown" by General Gage so he can get "the family guinea" to put up, and inevitably he's sent up Breed's Hill to fight the British. He has a harrowing experience as HBJ nicely emphasizes the terror of battle, which escalates as the colonials run out of ammunition and the British keep on coming. The tale turns pulpy only when Ford coincidentally encounters Sullivan at the climax of the fight, only to see his new buddy Martin, who's been hoping the whole time to kill a Redcoat, blow him away. Seeing the ensign mortally wounded, Ford suddenly doesn't want to claim his winnings, but Sullivan reminds him that "King's officer never - never welches." Knowing that the battle will discourage Gage from leaving Boston, Sullivan hands over his guinea as practically his last act, but by now Ford feels "It warn't wuth it -- there'd ought to be some other way." That there wasn't makes the tale a tragedy at both the macro and micro level, and something more than the patriotic pap one might expect from pulp, if one didn't know better.
Posted by Samuel Wilson at 8:16 PM No comments:

'As much as I loved my king, I love the Legion.'

When is a Foreign Legion story not a Foreign Legion story? Perhaps when the subject isn't the French Foreign Legion but it's Spanish counterpart. The Spanish organization is the subject of Robert Carse's "Legion" (Adventure,  December 1936), set in North Africa in the early days of the Spanish Civil War. Carse has something of a reputation as a leftist, so he might be expected to take the Republican side, but for this story, at least, he takes a neutral position. In short, an officer thought long lost escapes from Moorish captivity and promptly falls under suspicion as a relic of the old regime. The new commander is a Republican loyalist, but he and his predecessor eventually realize that their shared first loyalty is to the Legion. Their second shared loyalty is to Spain's colonial empire. Leftists the Republicans may have been, but that doesn't translate to anti-imperialism, at least in this story. Under Republican rule, the Legion's job remains to maintain Spanish rule in the region, while the old officer's main purpose is to avenge the insult to national pride he endured as a captive and virtual slave. The King of Spain may have oppressed  his own people, the old man concedes, "But before any King of Spain did that, we drove the Moors from there, swept them out and into the sea. I do not know, but I think that in the years the Moors held me as a slave the memory of those things kept me alive." The old hero dies an epic, almost Arthurian death, impaled on a bayonet but driving himself forward to get his old enemy the Moor in a literal death grip. So passes the old regime in honorable style, one might believe, though in fact it would be reborn in less honorable form, but leaving that aside, "Legion" is a typically solid action story from Carse that gains added interest from its historical context.