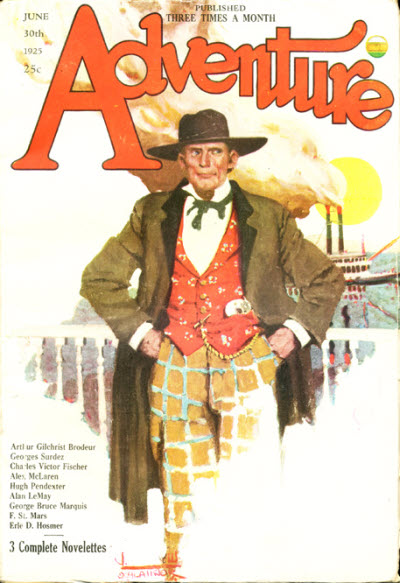 The admirable Saskia van de Kruisweg scanned this 1925 Adventure and made it available on the Internet Archive. There's actually a nice chunk of 1925 available online in different places, as you'll see later this summer. The indisputable highlights here are Georges Surdez's long novelette "The Figurehead" -- not a Foreign Legion piece but set in French colonial Africa -- and Arthur Gilchrist Brodeur's intense novelette of the Volsungs, "Vengeance." "Figurehead" is a typical Surdez conflict of strong personalities under the pressures of colonial rule, the sort of thing that always manages to come out fresh no matter how many times he rehashes similar themes, thanks to his gift for character. The French characters are nearly overshadowed by the plight of an elite African soldier, one of the few to get officer's training, who only finds that his native troops resent him and are always looking for a white officer to overrule him, even though the whites all trust in his superior character. As for "Vengeance," if you like Arthur D. Howden-Smith's Swain the Viking stories, you should like Brodeur's work as well. I also enjoyed all the chapters I've been able to read of Hugh Pendexter's western serial Pards. I was disappointed, however, to find Alan LeMay, future author of The Searchers, to be in attempted humor mode in his short story, "Terlegaphy and the Bronc," while I liked George Bruce Marquis' short story of a Native American detective, despite the pidgin dialect the hero speaks. The rest includes a boxing novelette by Charles Victor Fischer, stories by Eugene Cunningham, Erle D. Hosmer and Alex McLaren, and another animal story by F. St.Mars. Surdez and Brodeur alone will make this one worth your time, and you may like some of the other stuff, too.
Posted by Samuel Wilson at 12:00 AM