VINTAGE PAPERBACK OF THE WEEK: William Mulvihill, SANDS OF THE KALAHARI (1960-5) 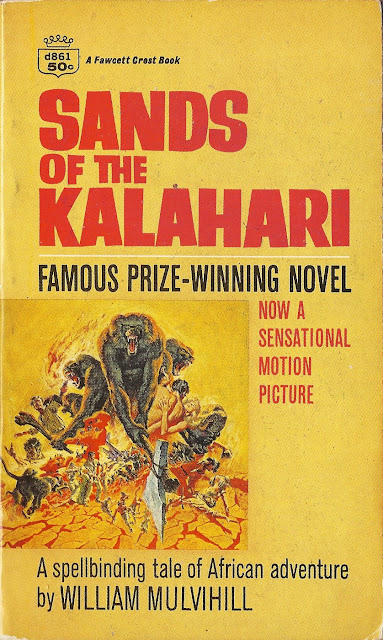 Here's a movie tie-in edition of William Mulvihill's novel that regrettably renders the movie poster art nearly indecipherable. The novel was first published by Putnam, which ballyhooed it by giving the author the first-ever $10,000 Putnam Literary Award. That must have worked, because Sands of the Kalahari eventually made the New York Times bestseller list. Mulvihill was no pulp writer, though Sands was serialized in the British Argosy magazine, a separate entity from the familiar American mag with a wider mix of literary and genre stuff. I've never seen the film Cy Endfield made from Sands, but I suspect the movie is pulpier than the novel was. Take a look for yourselves;  Criterion Dungeon uploaded the trailer to YouTube.

There's a lot less baboonery in Mulvihill's novel, and at no time does a baboon wield a stone axe. He writes one scene establishing the hierarchy of the troop, but for the most part the creatures are victims of the story's human villain, the American playboy O'Brien. Played by Stuart Whitman in the movie, O'Brien devolves into a monster, driving off other survivors of the initial plane crash and attacking the baboons in order to make the food and water supply in the survivors' mountain sanctuary last longer for himself and the only female, Grace Monckton. Mulvihill is interested in the wide range of human reactions to the challenge of survival in the desert. The character who eventually becomes the hero, Mike Bain, starts as the sickliest survivor, a former Navy Seabee gone to seed who has to go through alcohol and cigarette withdrawal before he can become a useful member of the group. At 192 paperback pages, the novel takes time to show the characters developing, while flashing back liberally to formative moments from their pasts. It's gratifying to see Bain, an engineer by training, track bees to their nearly inaccessible hive and figure out a way to extract the life-sustaining honey, and it's more shocking after that to have O'Brien force him into the desert at gunpoint. We've seen him do this before. A character who didn't make it into the movie, the black Ivy League professor Jefferson Smith, discovers a cache of ostrich eggs which can be used as water tanks, allowing the survivors to set up water stations for wider exploration of the desert. After proving his usefulness, O'Brien forces him to walk away -- he does this when he and his victim are separated from the others, so he can say they've gone crazy and he couldn't stop them -- because the only things that matter to O'Brien are hunting and reducing the number of mouths to feed. He convinces himself that he isn't killing them -- and, in fact, the only one of his victims who dies is the one who tries to fight him, and that one ends up killing himself by accident -- because he gives them a chance to find civilization and bring help for the others. But it becomes clear eventually that O'Brien isn't really interested in being rescued. His relentless desire for things he doesn't have makes the life of a wilderness hunter perfect for him, while it makes the man himself a menace to the other male survivors and an insensitive boor toward Grace, who is defined mainly by her irrepressible horniness for O'Brien.

There follows what reads like a rape because disillusioned Grace is yelling, "I'll kill you! I'll kill you!" throughout. But she feels better tomorrow and hopeful that O'Brien will love her someday. Virtually brainwashed by lust, she's hard to convince that O'Brien is forcing people to likely death, but a happy ending for poor Bain seems likely. Mulvihill hides Bain from us for several chapters, not giving us the point-of-view chapters of his ordeal that he gives to Smith and to the South African pilot, Sturdevant, who tries to make it through the desert voluntarily. That makes his unexpected reappearance to defeat O'Brien a nice surprise.

I finished the novel thinking that Sands could be adapted into a modern TV miniseries. It's a twisty kind of story full of moments when you think things can't get worse for one of our heroes, but they do. Sturdevant makes it through the desert to a mining station, only to be thrown in jail as an accused diamond thief. Smith is rescued by Bushmen, only to be sold into slavery in some godforsaken village. While we learn that someone finally must have listened to Sturdevant's story, we never find out what happened to Smith after we last see him impressing his village captors with basic medical skills. It's almost as if Mulvihill is suggesting condescendingly that the African-American academic has found a rightful place as a servant to the abject -- or else the author simply forgot about him, just as the movie decided to ignore him completely. That seeming lacuna aside, Sands of the Kalahari is a good survival thriller I'd readily recommend to anyone looking for exotic adventure without the 21st century bloat. 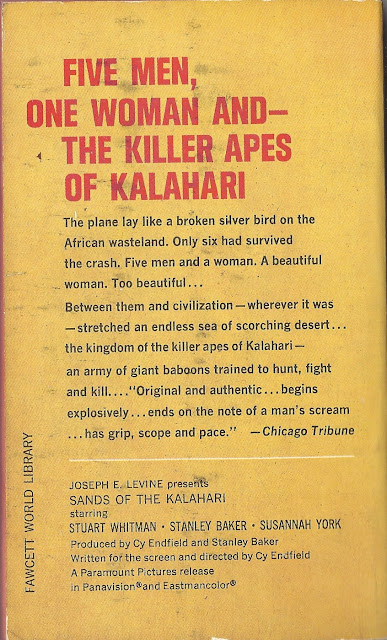 Posted by Samuel Wilson at 3:56 PM