THE PULP CALENDAR: May 25 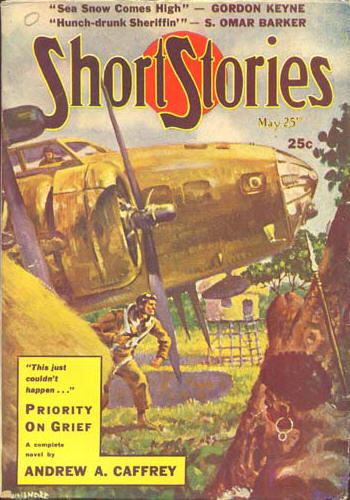 This 1946 issue is one of just a handful of issues of Short Stories available at unz.org, Ron Unz's tremendous collection of 20th century periodicals. In 1946 Short Stories was still chugging along on a twice-a-month schedule; only Ranch Romances kept a similar pace. In the wake of World War II there probably was no going back to the swashbuckling, filibustering pulp of the pre-war years, but Short Stories could still throw together a respectable package. I haven't read every story in this issue -- too many are too aspiringly humorous for my taste -- but Gordon Keyne's "Sea Snow Comes High" is a pretty good story. "Keyne" was the favorite alias of "king of the pulps" H. Bedford-Jones. As Keyne, he kept up with the times with a slightly noirish tale of a disappointed war veteran -- his girl didn't wait for him -- who gets drawn into a coastal cocaine smuggling operation run by a former POW who isn't all he seems. He falls for a girl with troubles of her own. She was a WAC whose boy didn't wait for her, and now her dad's a hophead whose property is being used by the smugglers. The ending's a little unlikely -- the old hophead goes vigilante on our villain and the gangster trying to muscle in on the racket -- but Jones/Keyne at his best was a nearly effortless storyteller who still managed to give his stories personality. I remember reading Andrew A Caffrey's cover story a couple of years ago -- it's a "complete novel" while Keyne's story is a "novelette" even though the Caffrey is only one page longer -- but I don't remember much about Priority on Grief other than that I didn't care much for it. E. Hoffman Price's serial China Clipper is probably good, but reading only Part Two of four hasn't seemed worth my while. The rest of the issue includes a comic western by S. Omar Barker, a comic sea story by Francis Gott, another comedy by Ray Palmer Tracy, and tales in a more dramatic vein by Jim Chapman, John E. Kelly and H.S.M. Kemp. Follow the link below and check the issue out yourselves.