THE PULP CALENDAR: May 24 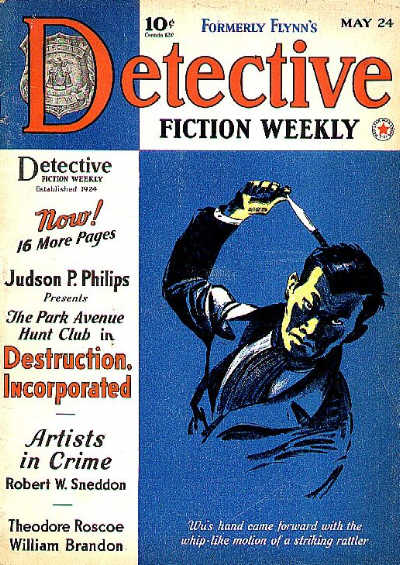 Like its Munsey stablemate Argosy, Detective Fiction Weekly got an urgent makeover at the end of April 1941, replacing an ugly standard photo collage with something short of an actual cover painting, yet still original art in a minimal way. As you can see here, the cover art is not much different from an interior illustration. At a moment when pulps were facing a formidable new challenge in the form of comic books, I don't know what Munsey's idea was here, apart from not having to pay for cover paintings. The "Now! 16 More Pages" on the cover advertises a page increase that happened back in March, after readers complained that the Munsey pulps at 50 triple-columned pages were difficult to read. In some ways it remained business as usual at DFW. Judson Philips' Park Avenue Hunt Club was still in business after seven years, for instance. Veterans like Theodore Roscoe and Hugh B. Cave were still publishing, while this issue marks the DFW debut of future genre star William Campbell Gault. Edwin Baird, William Brandon and Kay Krausse are the other fiction contributors. DFW fits seven stories (including Roscoe's serial) into its 66 pages, along with Robert W. Sneddon's nonfiction piece, W. A. Windas's cartoon page and the longrunning "Solving Cypher Secrets" column. It still sounds like an attractive package for ten cents, but it doesn't look as attractive as it used to.
Posted by Samuel Wilson at 12:00 AM