THE PULP CALENDAR: May 11 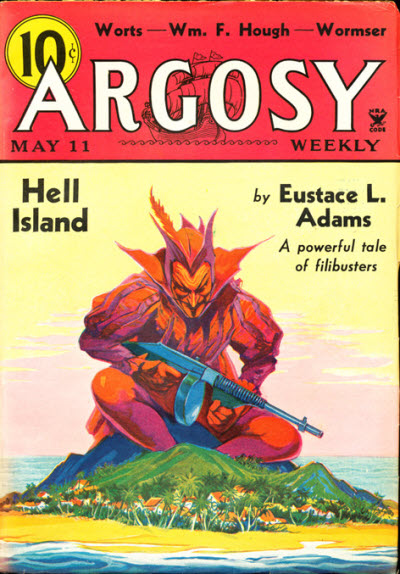 If memory serves, "Hell Island," this 1935 Argosy's cover story, was the first story by Eustace L. Adams I ever read. It won Adams a 21st century fan. "Long Novelette," as the thing's described inside, is truth in advertising; at 48 pages, it'd be a "Short Novel" if not just plain "Novel" in other pulps. "Hell Island" is a typical Adams product of this period, throwing a world-weary American adventurer into Latin American mayhem. For someone whose main gig was writing aviation stories for kids, Adams did this more mature, hard-boiled stuff very well. The story and the entire May 11, 1935 issue are available at unz.org, and here's your direct link to "Hell Island." I regret to say the Adams story is all I've read from this issue, though I have Richard Wormser's novelette, "You Have to Learn Sometime" on my e-reader somewhere. Theodore Roscoe and George F. Worts continue serials, the latter featuring ace defense attorney Gillian Hazeltine, while Anthony M. Rud is probably the best known of the short story contributors.It may not have the most stellar lineup of authors, but since Argosy was arguably at the height of its powers in 1935 I'm sure it's another solid issue. When you consider that "Hell Island" takes up approximately one-third of it, you can hardly go wrong.
Posted by Samuel Wilson at 12:00 AM