THE PULP CALENDAR: May 9 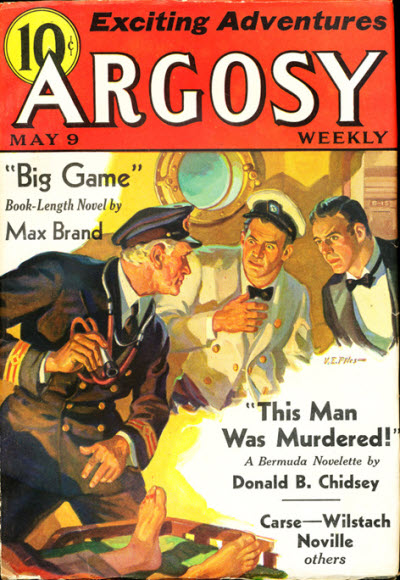 This 1936 Argosy is one of my more recent acquisitions. Not this copy, however; I was busy trying to finish a complete-issue scan of another Argosy (you'll see it here later this week) and didn't get around to my usual front, back and index routine for my own copies. Come back tonight and I may have those scanned in. Anyway, I've only recently started to explore 1936 in the pages of Argosy. It's been mostly virgin territory because unz.org only has the January 4 issue and no one to my knowledge has scanned any other issues from that year.This issue's attraction for me was threefold. It has novelettes by Donald Barr Chidsey (the cover story) and Robert Carse and a short story by Ralph R. Perry -- one of his first after retiring Bellow Bill Williams. I haven't read any of the issue yet so I can't tell you much about these stories, though I'm really looking forward to Carse's "Destiny Walk" at a generous 38 pages. The kings of pulp, Max Brand and H. Bedford-Jones, both have serials in here, Brand starting Big Game and Bedford-Jones finishing River Devil, while John Wilstach continues one of his circus stories, Big Top Banners. There's also an animal story by Kenneth Gilbert and an Aleutian islands story by H. H. Matteson, who seems to have specialized in that sort of thing. Chidsey was really getting busy at Argosy this year, publishing ten stories in 1936 when he had only placed three the previous year. He'd be one of the venerable weekly's mainstays for the rest of the decade and was pretty consistently good at it. The first half of 1936 looks like a good period to collect on the cheap,before Edgar Rice Burroughs brings Tarzan back, before Robert E. Howard's posthumous run of western stories starts, and before L. Ron Hubbard shows up. Look for more 1936 issues from my still-growing collection later this year.
Posted by Samuel Wilson at 12:00 AM