THE PULP CALENDAR: May 8 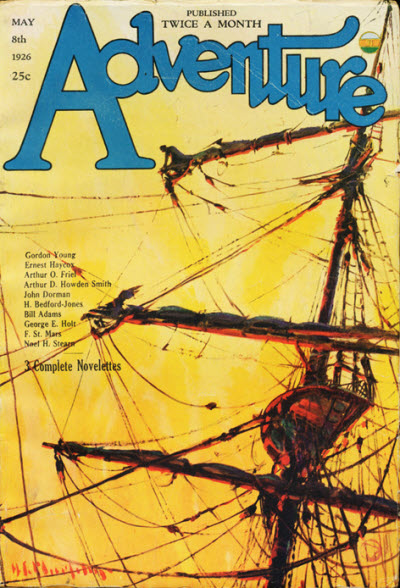 After reducing its publication schedule from thrice-monthly to twice-monthly in 1926, Adventure's publication dates were the 8th and 23rd of the month for the rest of the year. The magazine actually reverted to thrice-monthly for one last time that December, closing the year with the odd stunt of a December 31 issue followed virtually immediately by a January 1 issue. There was, no doubt, more of a gap between the dates those issues actually arrived on newstands. Anyway, here we are in May, with a decent lineup headed by Arthur O. Friel, introducing the series character Sixto Scott, and Gordon Young, with his long-popular series character Don Everhard. Eyebrows might raise at that name had editor Arthur Sullivant Hoffman not been something of a prude who wouldn't allow the words hell and damn into his pages. Ranking ahead of Young for me are Arthur D. Howden-Smith, here continuing a serial, and top-hand western writer Ernest Haycox. H. Bedford-Jones is here, too, with something simply titled "Son." Leonard H. Nason would make this a major issue if he weren't doing non-fiction this time. George E. Holt contributes a Mohamed Ali story, Bill Adams presumably adds a sea story, and F. St. Mars presumably includes an animal story. Overall a typically strong lineup, and with Adventure back to twice-a-month the typical issues should have more concentrated quality than before, when the standard already was very high.
Posted by Samuel Wilson at 12:00 AM