THE PULP CALENDAR: May 1 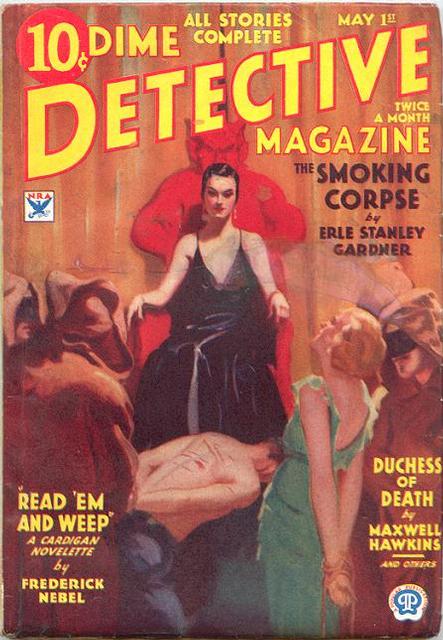 John Howitt's cover for this 1934 Dime Detective is almost tasteful by shudder pulp standards. Nearly everything draws your eyes away from the lashes on the male victim's back. This grim scene presumably illustrates Erle Stanley Gardner's novelette "The Smoking Corpse." For me, as established the last time we looked at Dime Detective, the highlight here would be Frederick Nebel's Cardigan story "Read 'Em and Weep." I read a Cardigan every few weeks or so and am still only in volume one of Altus Press's four-volume complete collection. I've liked them all so far.  Some short-lived series heroes get fresh outings here: This week's "Hot Money" was the second of five outings for Roger Torrey's Johnny Carr, while Maxwell Hawkins' "Duchess of Death" (maybe that's the cover story!) is the fourth of six appearances by the Jones brothers. Gardner's is a standalone story as is "Zero Hour" by Anson Hatch -- a short-lived pseudonym for Phillip Clark, who also wrote as Harrison Keith for Nick Carter before switching to his real name in 1935. Nebel and Gardner alone probably made this issue worth your dime in 1934 or however much more you'd pay for it now.
Posted by Samuel Wilson at 12:00 AM