THE PULP CALENDAR: May 15 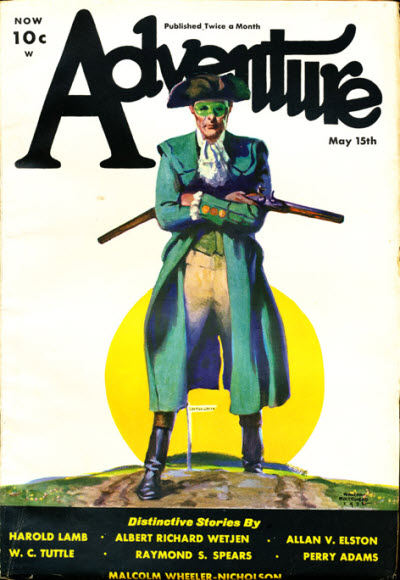 This 1933 Adventure was the last twice-a-month issue of the once-mighty pulp under the old regime. Less than a year earlier, the publisher had slashed the page count in half, from 192 to 96 pages, and cut the price by more than half, from 25 cents to a dime. Adventure's troubles presumably were peculiar to its publisher, since Short Stories continued to churn out two a month at 176 pages apiece and Street & Smith kept Complete Stories on the same schedule at 160 per. Starting in June, Adventure would become a monthly, its page count increasing to 128, its price to 15 cents. Popular Publications would briefly restore it to twice-a-month after acquiring Adventure in 1934. Even in the diminished form in which we find it in May 1933, Adventure could still field a formidable lineup. This issue has two of the magazine's superstars: Harold Lamb starting the serial The Golden Horde and W. C. Tuttle continuing a Hashknife Hartley serial, Rifled Gold. An extra attraction for me is Albert Richard Wetjen's lead novelette In The Tradition; I learned to like his sea stories in Collier's and his pulp stuff is at least as good. There's also room for stories by Allan Vaughan Ellston, Malcolm Wheeler-Nicholson, Perry Adams and Raymond S. Spears. If you didn't know what Adventure had been a year before you'd be really impressed. You probably should still be impressed a little.
Posted by Samuel Wilson at 12:00 AM