THE PULP CALENDAR: May 16 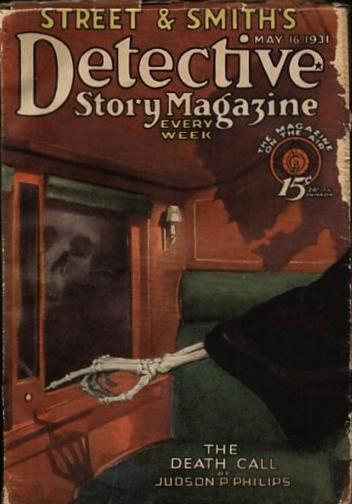 An understatedly creepy cover fronts this 1931 Detective Story, advertising Judson P. Philips' story "The Death Call." The big names this issue are Edgar Wallace, continuing the serial On the Spot, and Zorro creator Johnston McCulley, apparently intending to retire another of his creations. McCulley is one of the ancestors of superheroes by virtue of his costumed crimefighters. Perhaps the strangest of these, just on appearance, was the Crimson Clown, created in 1926. The mystery man who was really Delton Prouse often got the cover once his series was under way, but had just had that honor two weeks earlier. That May 2 cover probably is as formidable as the character would ever look. John A Coughlin's cover for that issue looks like something Alex Ross might come up with today. 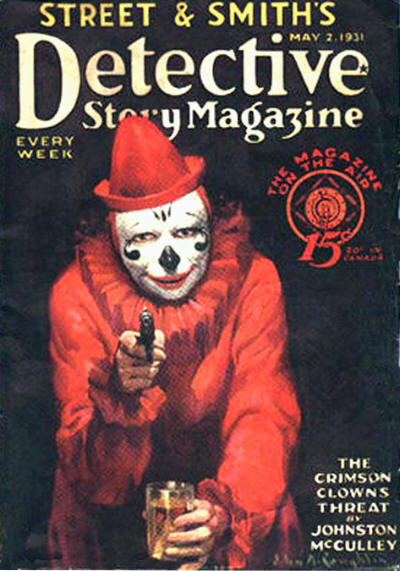 I've never read any Crimson Clown stories, so I can't judge him on more than a superficial level. The May 16 story is "The Crimson Clown's Romance," but according to Robert Sampson's Yesterday's Faces it's not the Clown himself falling in love. The series simply stops here, but McCulley brought the character back for a belated encore in a 1944 story in the Thrilling group's Popular Detective. The rest of the May 16 lineup includes Detective Story mainstay Charlotte Dockstader, Ronald Everson, John Foland, Warren Kimsey and Charles Kingston. I can't say much about the stories, but for the first half or 1931 or so Detective Story has some great art direction on the covers. McCulley probably realized that a costume character often made a really cool cover. Street & Smith definitely took that idea to heart, but writers other than McCulley benefited the most from it.
Posted by Samuel Wilson at 12:00 AM