VINTAGE PAPERBACK OF THE WEEK: Ian Gordon, THE BURDEN OF GUILT (1951-3) 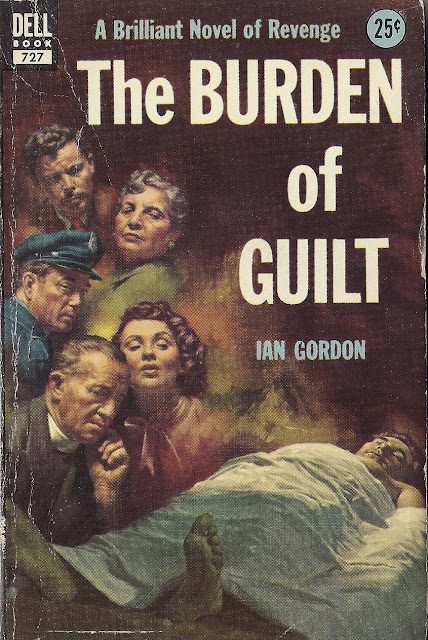 First published in hardcover as an Inner Sanctum Mystery, The Burden of Guilt could best be described as a psychological mystery novel, more of a whydunit than a whodunit. Police detective Connell takes a call from a minister -- a prison chaplain, actually -- confessing his murder of his wife and her lover. Connell arrives to discover that the lover is his best friend Irving Freed, a celebrity of sorts hailed by some as "the conscience of America." Physically frail and artistically gifted, Irving shunned his obvious career path to challenge himself physically, first as an incompetent football player and later as a volunteer for both Mao's Long March and the Spanish Civil War. He apparently hooked up with the chaplain's wife while doing a stint in prison, but despite the chaplain's confession something doesn't seem right about the story to Connell. He becomes convinced that the chaplain was psychologically manipulated into killing the couple by a master manipulator, the warden of Broadmoor prison, and despite the fact that no one has ever been convicted of that sort of manipulation, Connell resolves to find some way to bring the warden down. His investigation involves piecing together Irving Freed's life and career from the handful of mourners who attended his funeral, with the thought of revealing a motive for the warden's presumed scheme, as well as how he did it.The investigation is also a way for Connell to work through his own intense grief and anger over Irving's death, as well as a sense of guilt he shares with many other people -- excepting the warden, of course. 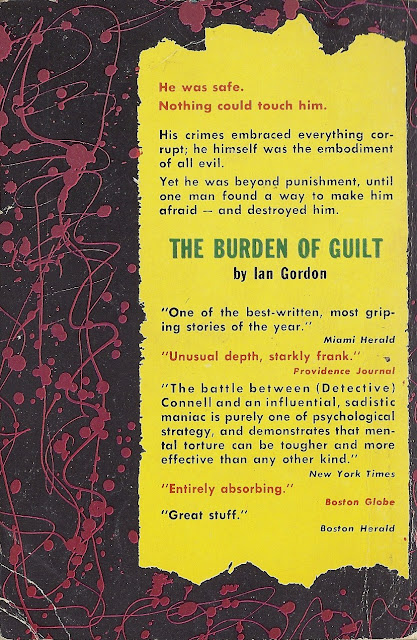 Gordon was no pulpster, though he published a story in the post-pulp Argosy in 1950, shortly before Burden of Guilt appeared. His novel is more psychologically ambitious and politically conscious than the typical paperback mystery, though his somewhat overwrought style doesn't seem out of place between paperback covers. What really comes through the mystery plot is a preoccupation with the psychology of masculinity. Irving Freed, for instance, is determined to prove himself a real man in emulation of his physically powerful stepfather, a caring man and loving husband who doesn't want Irving to hurt himself and urges him to develop his obvious talent for the arts. Irving has something Oedipal going on, too, since by emulating his stepdad he hopes to earn the love his mother has always denied him as the spawn of a loveless first marriage to an incompetent, moribund would-be artist. Meanwhile, Herbert Spathe, the murderous chaplain, fell under the influence of the future warden when the latter became the lover of Spathe's widowed mother, the man's powerful will making him a replacement father figure. Gordon's speculations darken when he introduces the figure of Melvin Vye, a famous war correspondent whom I first assumed to be a riff on Ernest Hemingway -- Gordon even introduces the character with a suspiciously punning "phony-earnest" greeting. In his lifetime, Hemingway was seen as both a philosopher and embodiment of masculinity in some rationalized-primitive form. But then Gordon goes and makes Melvin Vye an open homosexual, a "queen" as the relevant chapter describes him. That would seem to suggest that Vye has another model, but I also recall that some contemporaries inferred latent homosexuality from Hemingway's concern with manhood. Interestingly, in light of the real Hemingway's destiny, Vye has a hunch that proves true and nearly turns the plot upside down. He suggests to Connell that Irving Freed himself killed his lover and then himself in a suicide pact, while Spathe showed up after the fact to pump an extra round into each corpse out of spite. Despite this, Connell remains convinced that Fletcher Boone, the warden, was responsible for the deaths.

A set of letters from Spathe to his wife, degenerating from forgiving resignation to damning rage, seems to serve as proof of Boone's manipulation of the chaplain and his indirect torment of a woman he apparently intended for himself. It's still hard to build a legal case against Boone from this, but Connell's really out for revenge, and that he can get through the same sort of psychological manipulation Boone supposedly exerted on his victims. Connell's vengefulness -- we see it in the first chapter when he impulsively smacks Spathe in the face -- and his unforgiving grief over Irving's death might throw his own feelings for his friend into question, but Gordon is careful to show us the death devastates many people, from Irving's mom and stepdad to a former lover to an exiled Spanish republican commander who betrayed him, and so on. The way Gordon lingers on this persistent grief and guilt while more generic writers might move on quickly marks Burden of Guilt as a more literary noir than normal, though its hard-boiled roots remain obvious all the way through. "It's very irritating to be caught in a helpless position you idiotically daydreamed yourself into, and I made up my mind that this was one Number One Fathead who was not going to cook in his own axle grease," goes one typical first-person passage. And for those curious about what's on page 123, I give you "You had to understand his sickness before you realized that the esthetic quality was, in fact, a pure lack of masculinity." If the novel has a major weakness, it's that the master manipulator, Warden Boone, proves all too easily manipulated. Connell seems able to get under Boone's skin effortlessly, when we might expect a master manipulator to be more poker-faced. Connell's breaking of Boone doesn't ring as true as the broken-ness of Irving Freed's friends and family, which may only indicate that Ian Gordon was really interested in the grief, while the guilt was an afterthought.
Posted by Samuel Wilson at 9:00 AM