THE PULP CALENDAR: May 4 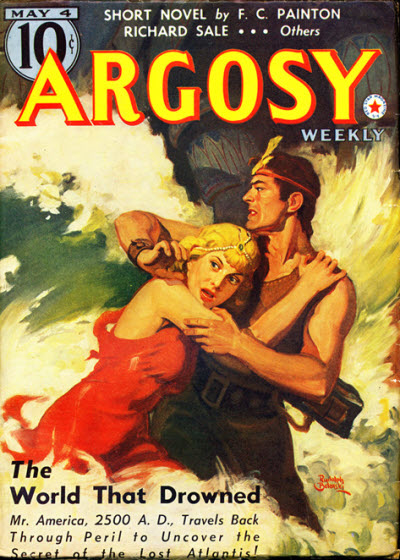 Fantastics, as Argosy called science fiction or fantasy stories, didn't often get the cover of the venerable weekly. There probably were more sports-story covers in a given year, though Argosy published fantastics more often than the covers would suggest. This fantastic 1940 cover spotlights a departure in genre for Frederick C. Painton, who typically wrote about contemporary international intrigue. "The World That Drowned" launched a short-lived "Time Detectives" series consisting of another novelette in October 1940 and a serial the following year. I read this issue approximately one year ago, but I regret to say that I remember nothing about Painton's cover story, nor anything about the other stories except for Charles Marquis Warren's outstanding and brutal western serial Bugles Are For Soldiers. As this is the period of Argosy's precipitous decline, I don't entirely blame my erratic memory. The most I can say for the rest is that I remember liking Roy de S. Horn's Robin the Bombardier series set in late medieval England, which continues here with the conclusion of the two-parter Bowman's Banner. Overall, however, it's probably safe to say that most of the contents fail to live up to Rudolph Belarski's dramatic cover.
Posted by Samuel Wilson at 12:00 AM