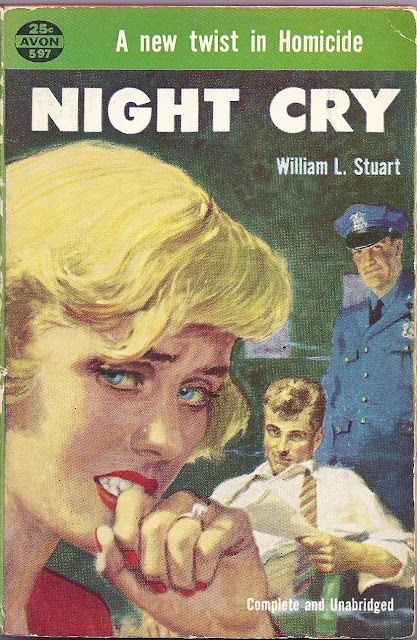 Years ago, when I was a little girl, I used to wake sometimes in the night. I'd lie in bed, and hear the far-away cries of the hunting things in the night, and they'd fill me with a kind of lonesomeness and terror for all the creatures that were being hunted in the darkness. 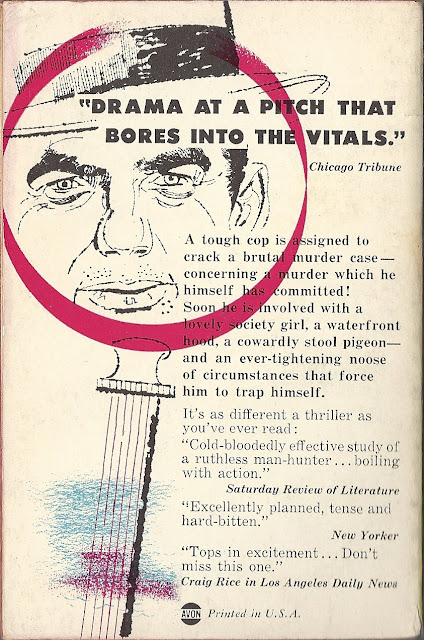 Morgan Taylor's frightened reminiscence gives William L. Stuart's novel its title, though people may know the story better under the title Twentieth Century-Fox and Otto Preminger gave it, Where the Sidewalk Ends. By the time this Avon paperback appeared in 1954, the movie was no longer a selling point worth mentioning. In case you're not familiar with the movie, the back cover copy sums up the plot pretty well. To fill in a little, we're first introduced to Morgan Taylor and her boyfriend, a troubled former sports and war hero turned would-be writer, as he loses his and her money in a classy gambling parlor. Having been thrown out for getting into a fight with another patron, the boyfriend becomes a prime suspect when the other patron is found dead at the casino. Detective Mark Deglin, just passed over for promotion, goes to the boyfriend's place to question him but hits him a little too hard. Moments later, he learns that the police have captured the confessed killer. Now Deglin has to dispose of the body and make it look like the guy fled town because of the killing. Cop and victim look sort of similar, being about the same size, so Deglin puts the stiff's clothes on to go in and out of the building, finally dumping the body off a nearby waterfront. That should wrap it up; everyone should buy that the guy panicked over possibly being implicated in the murder and made himself scarce. But Morgan wants to reconcile with her beau and won't accept that he's vanished, and a persistent reporter writes up her angle on the story. The publicity pushes the police to continue looking for the man, until they turn up a witness who saw someone dressed like her neighbor, but clearly not him -- the real man waved to her every time he went out -- carrying a suspicious large object. Soon enough, the body is pulled from the water, but to Deglin's horror he has committed a just about perfect crime. Every piece of evidence turned up points away from him -- he used gloves in the victim's apartment -- but toward Morgan and a former boyfriend who'd gotten into a fight with the more recent one recently. Deglin apparently can live with having killed a man, but seeing an innocent take the blame is more than he can bear. Such are the makings of a story that's half-Dostoevsky, half-Cornell Woolrich and well grounded in working-class cop life. Deglin's troubled relationship with a torch singer clearly was troubled, as was he, before the disaster of the novel, but Stuart -- who never wrote for the pulps, as far as I can tell -- does a good job understating Deglin's dysfunctions in order to keep him sympathetic in his desperation and mounting guilt, even when he's poised to murder an inconvenient stoolie in cold blood. You can understand why Hollywood saw it as perfect raw material for a film noir. I haven't seen Where the Sidewalk Ends, but I have it scheduled to record on my DVR later this week, so I ought to have something to say about it soon on my movie blog. On its own, Night Cry is a good example of the bad-cop subgenre. Compact at 156 paperback pages without sacrificing atmosphere, it's the kind of good short novel you hardly see anymore, presumably because there's not enough profit in it.
Posted by Samuel Wilson at 9:00 AM