THE PULP CALENDAR: May 5 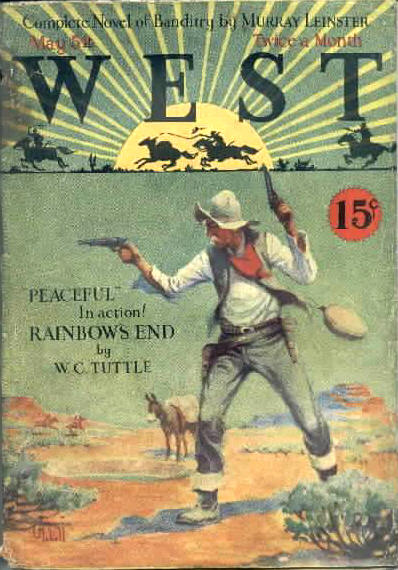 Here's an early issue of West. It's Vol. 2, No. 3 from 1926, but it took just six twice-a-month issues to make a volume in those days. The Fiction Mags Index doesn't label W. C. Tuttle's story "Rainbow's End" as a series story, but we're clearly expected to know who "Peaceful" is. Presumably he's Peaceful Peters, the protagonist of a 1920 Short Stories novelette (hence from the same publisher as West) that was made into the 1922 movie Peaceful Peters. There's no way to know how many Peaceful Peters stories Tuttle wrote, as there's no titling gimmick to tip us off, unless you're a Tuttle completist. We know that he wrote a string of stories about the character for Street & Smith's Western Story in 1937-8. Tuttle could work a character a long time, so there may be more beyond those that aren't clearly labeled. Anyway, one of Tuttle's peers, Frank Richardson Pierce, lands a short story this issue, while Murray Leinster, later better known for science fiction, gets the "complete novel" (53 pages) advertised on the cover. Charles Wesley Sanders starts a serial, Young Lightning, while Hugh F. Grinstead, Howard E. Morgan, Stephen Payne and Al Priddy bring up the rear. The funny thing about this issue is that it sports a so-so cover by James C. McKell, who would graduate to Saturday Evening Post cover, while the inside front cover sports a frontispiece by the legendary western artist Charles M. Russell, one of three he'd contribute to West in the final year of his life. That seems just a little backwards to me.
Posted by Samuel Wilson at 12:00 AM