THE PULP CALENDAR: May 19 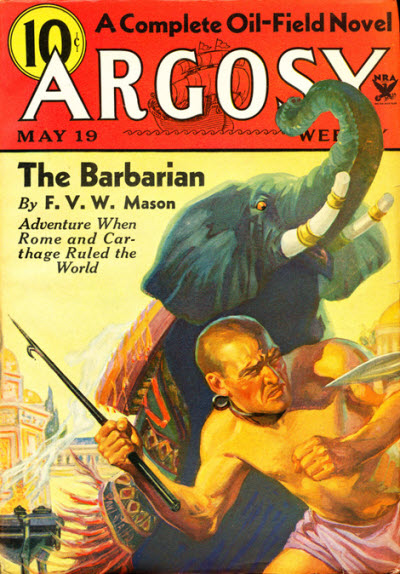 Now this looks like what modern readers might expect from pulp: barbarism in the Robert E. Howard mode. It's more like the Talbot Mundy mode, actually. F. W. V. Mason's The Barbarian (I have a couple of chapters, but not this opener) is a Briton captured and enslaved by ancient Carthage who becomes embroiled in the intrigues of Romans and Spartans while dodging the lustful intentions of a Carthaginian princess. This is a more straightfaced period piece than Mason's later Lysander of Chios, but both are pretty entertaining adventure stories. The other serials this issue are J. Allen Dunn's Forbidden Mountain and Evan "aka Max Brand" Evans' Montana Rides Again. Along for the ride are Jack Allman, Foster-Harris, Hapsburg Liebe and H. H. Matteson. Of these. Matteson can be good and Allman can be very good. I'll probably get this someday in order to have The Barbarian complete, though I could just as easily track down the revised paperback version, with the title rendered plural, which Mason published in the 1950s. That probably would prove slightly racier, but something might be lost from the original as well.
Posted by Samuel Wilson at 12:00 AM