THE PULP CALENDAR: May 20 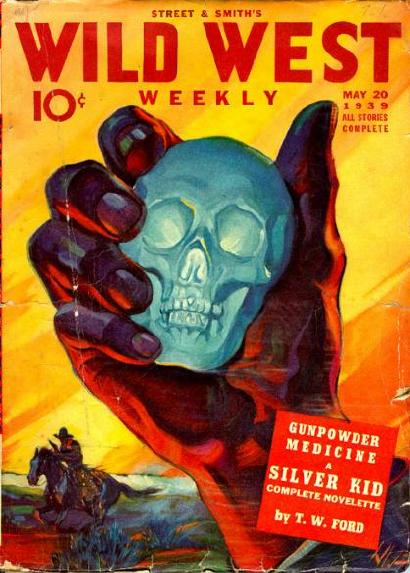 Compare H. W. Scott's May 17, 1941 Western Story cover  with his outlandish image from a 1939 Wild West Weekly. This is pure symbolism, or at least I'm going to assume that a miniature skull sculpture doesn't figure in the Silver Kid's latest adventure. But I suppose that the possibility that the cover doesn't tell you what's going on inside was part of the problem. I infer a problem from Street & Smith's adoption of a more conservative cover format before the year was over. I don't know how popular S&S covers from this period are, since they lack the lurid action that defines pulp for many fans and collectors, but I find them fascinating. As for the insides, Lee Bond gets two stories this week, one under his own name, the other the penultimate novelette in the six-week Cliff Merchant series, credited to Andrew A. Griffin. Apparently the other story is the penultimate entry in Bond's Calamity Boggs series, which he started back in 1931.That predates T. W. Ford's Silver Kid, the presumptive star of the issue. Ben Conlon and C. William Harrison have standalone stories, while Chuck Martin continues his Rawhide Runyon series. I don't want to disparage what I haven't read, but I do wonder whether more imagination went into the cover than the stories inside some weeks.
Posted by Samuel Wilson at 12:00 AM