THE PULP CALENDAR: May 17 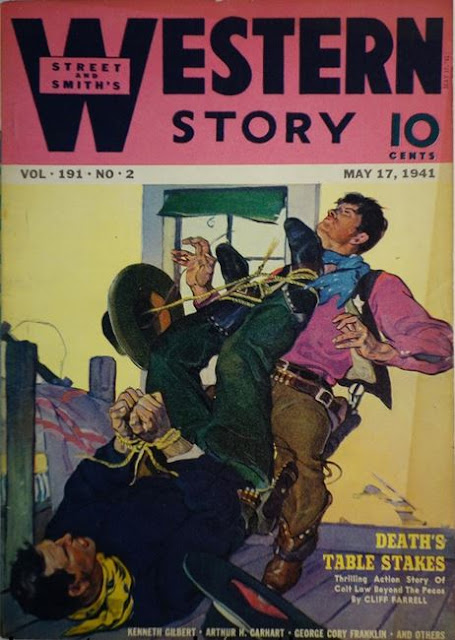 H. W. Scott's cover for this 1941 Western Story is much more conventional than the work he and others did for Street & Smith covers just two years earlier. While he occasionally works from an unusual camera angle, so to speak, Scott is clearly under orders to do without the close-ups of hands or objects, or more abstract cover concepts. The company now wants complete human bodies in action. These covers are often well rendered but, for me at least, they don't pop the way the more creative 1939 covers do. Of course, people weren't buying pulps based on an aesthetic impression of the cover art. More likely, if they wanted stories with action they expected covers with action. As for the stories, Peter Dawson (Luke Short's brother in real life) launches a five-part serial, The Stageline Feud, but Cliff Farrell gets the cover for his novelette "Death's Table Stakes." while Dawson goes unmentioned among the "Others." He shouldn't have felt too bad, since Seth Ranger (aka Frank Richardson Pierce) didn't merit a mention for his short story "Red Back Trail." Meanwhile, comparatively minor writers like Arthur H. Carhart, George Cory Franklin and Kenneth Gilbert get billing on the cover. There's also a story by Glenn H. Wichman about his series character Hep Gallagher, who dated back to 1932. According to the Fiction Mags Index, "Hep the Goat-Getter" is a reprint from a 1938 Western Story. That seems like bad form for Street & Smith, since reprints usually were a sign that business was bad, but I wonder whether the prolific Wichman simply reused a title without remembering that he'd used it before, without a very busy editor noticing or caring much. It would surprise me more if such things didn't happen in the pulp business.
Posted by Samuel Wilson at 12:35 PM