THE PULP CALENDAR: May 2 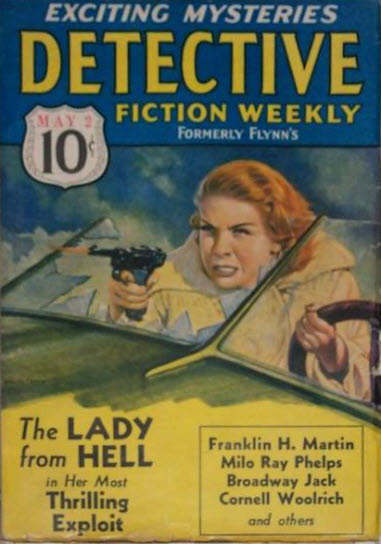 This 1936 issue of Detective Fiction Weekly was the fourth cover for Eugene Thomas's "Lady From Hell," Vivian Legrand in little more than a year of existence. This one isn't the most flattering shot, but I suppose you have to blame the intensity of the moment that shows on her face. You try to shoot and drive at the same time; I bet it's pretty stressful! While Legrand is the star of the issue -- note that her author isn't mentioned on the cover, though that may be a vestige of the original pretense that she was a real person -- the big name for posterity is thriller master Cornell Woolrich, while the big name for collectors isn't even on the cover. L. Ron Hubbard broke into pulps in 1934 and broke into the Munsey pulps two years later, beginning with the March 14 DFW. "They Killed Him Dead" is Hubbard's second story for the weekly. I know nothing about Franklin H. Martin, Milo Ray Phelps or the presumably pseudonymous "Broadway Jack." But I did learn that serial author Donald Ross was an alias for Fred MacIsaac, while "The Light Cure" author Beech Allen was an alias for H. C. Langer, and as was often the case in pulp, initials are an important tip-off. In this case, the H. stood for Hedwig, the author being the wife of fellow pulpster Anatole Feldman. A pretty impressive lineup, overall.
Posted by Samuel Wilson at 12:00 AM