THE PULP CALENDAR: May 28 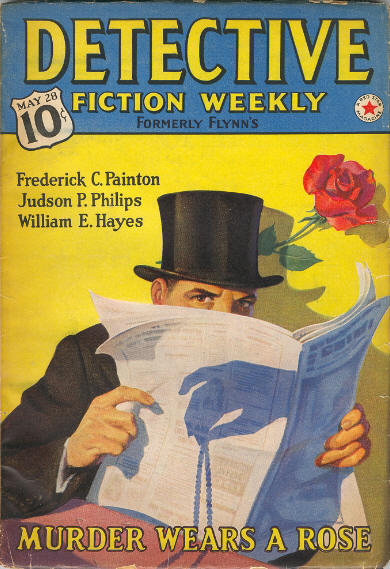 The great mystery of this 1938 cover is which of the three authors listed wrote "Murder Wears a Rose?" Is it Judson P. Philips? No, for Philips was continuing the serial We Trade in Death, in which he launched a would-be alternative to the Park Avenue Hunt Club, namely the Old Town Detective Agency. Is it Frederick C. Painton? No, for Painton's novelette is the more badass-sounding "Doctors of Doom." That leaves us with the least interesting option, William E. Hayes, a railroad story specialist and onetime editor of Munsey's Railroad Stories. Of course, it always could have been none of the above, since you never know for certain what cover editors are thinking. Frank Gruber is the best-known of the short story contributors to this issue. He's joined by Eric Howard, Cyril Plunkett and Arden X. Pangborn, who was in the middle of a happy run of stories in three consecutive issues. Howard's helpful story is titled "Never Sock a Dame." I suppose someone in 1938 would have thought that "politically correct."
Posted by Samuel Wilson at 12:00 AM