THE PULP CALENDAR: May 29 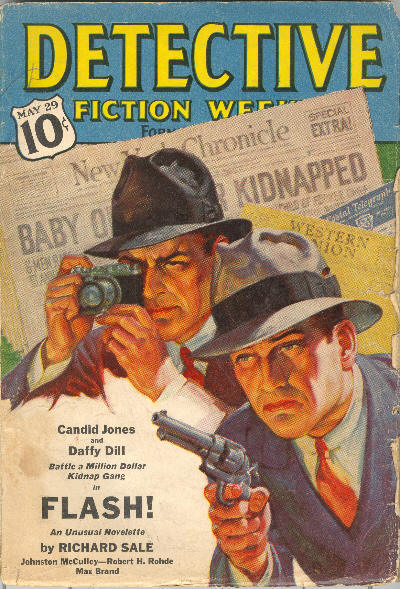 Richard Sale had been publishing the adventures of Daffy Dill in Detective Fiction Weekly since late 1934. Earlier in 1937 he had created a new series character, the photographer Candid Jones. What better way to put Jones over than to team him up with the more-established Daffy in a team-up story, Candid Jones's fifth appearance so far that year? "Flash!" was reprinted just last year in an issue of Alfred Hitchcock's Mystery Magazine and so may be more easily available than any other story about either character. Older still than Daffy Dill was Johnston McCulley's Thubway Tham, the lisping pickpocket, who in this issue makes his DFW debut after running in Street & Smith's Detective Story since 1918.  Tham would appear just once more in DFW before returning to the Street & Smith embrace that fall. The other series character this issue is J. Lane Linklater's Sad Sam Salter, here making the second of three appearances, all from 1937. Max Brand and T. T. Flynn continues their serials -- and, yes, this is a detective and not a western magazine -- while Edwin Baird, Bob Gordon, Douglas Newton and Robert H. Rohde contribute short stories. Not a bad package, probably.
Posted by Samuel Wilson at 12:00 AM